Cause enemies to dance

The Groove Machine is a music player item included in the Sheep Wreck Island Adventure Pack. When placed on the Portal of Power, it makes nearby enemies dance, leaving them vulnerable. In 3DS version, the around enemies fall asleep and don't attack. 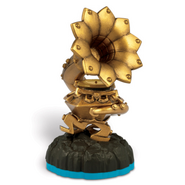 The Groove Machine figure
Add a photo to this gallery

Retrieved from "https://skylanders.fandom.com/wiki/Groove_Machine?oldid=106477"
Community content is available under CC-BY-SA unless otherwise noted.