“Your Time Is Up!”
—Grim Creeper's official catchphrase

Grim Creeper is a reaper who is one of the Core Undead Skylanders in Skylanders: Swap Force.

Grim Creeper may be grim by name and also nature, but this reaper is passionate about fighting evil and will always be a hero through and through. He stands his ground whatever the situation.[2]

When he was young, Grim Creeper visited the prestigious Grim Acres School for Ghost Wrangling, hoping to attend as a student. But when the Scaremaster interviewed him, he found that Grim didn't have any of the usual training that other students had. Because of this, he was turned away. However, as the young Grim was about to leave, a herd of rampaging ghosts suddenly flooded the school -- carrying away the faculty and leaving the students to fend for themselves. Grim Creeper stood his ground -- not only defending the other students, but using his amazing reaping talents to fight back the ghosts and contain them until help could arrive. Now a Skylander, Grim is considered one of the best reapers ever to swing a scythe, proving that studies alone are no substitute for bravery, passion and true heroic spirit.

For his first mission, Grim Creeper was assigned to help Eruptor and Slam Bam at The Frost Seas. After saving an exedition camp from a group of Cyclopses lead by Bloodshot, he and the two other Skylanders came upon a tunnel that lead to what remained of a frozen kingdom. Master Eon soon appeared and explained that the kingdom belonged to King Nefarion, a wicked being who terrorized Skylands with the Mask of Power. Suddenly, strange changes began to occur, as Kaos had made his way to the past and began changing history. Before their eyes, Professor Splinters morphed into a servant of Kaos, affected by the time change, and Master Eon quickly sent Grim Creeper, Eruptor and Slam Bam to the past to stop Kaos.

Become one with the spectral scythe! Deal devastating scythe attacks to enemies!
Learn new tactics and strategies to damage enemies while in ghost form! 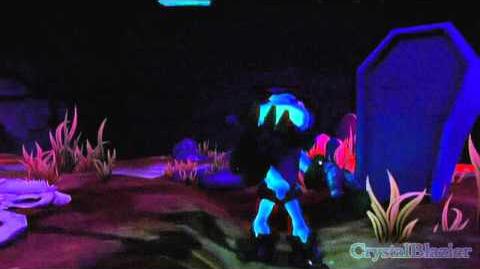 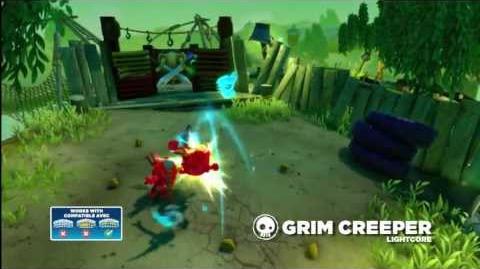