View source
watch 02:17
New Pokemon Games - The Loop
Do you like this video?
Play Sound

Grilla Drilla is a Drilla who is one of the SWAP Force Skylanders in Skylanders: Swap Force. He is of the Life element, and his Swap Force Ability is Dig. He has a construction counterpart who is available in Lost Islands on May 2014.

In the distant jungles of what was once the sprawling subterranean city of the Drilla Empire, Grilla Drilla served among the guards for the Drilla King. Every seven years, the king would select the bravest and strongest guard to become their leader. It was during the last selection ceremony that a troll mining operation broke through the ground above them and quickly snatched the king, wanting to know the location of the famed Drilla Diamond. Having never ventured above ground, Grilla Drilla risked everything to defeat the trolls and rescue the Drilla King. In return for his bravery, Grilla was selected as the new leader. But he instead decided to join the Skylanders, where he could protect even more residents of Skylands. 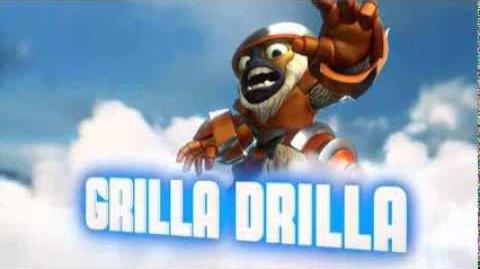