“A face only a mummy could love.”
—Villain Vault

Grave Clobber is a living stone mummy who is one of the trappable Earth Villains in Skylanders: Trap Team.

Grave Clobber is aloof, violent and intimidating with his attacks and threats. However, he appears to have a soft side, as he will take the time to say punny catchphrases and was seen calmly observing bugs in his Sensei Shrine cutscene before being disturbed by the Brawler Shrine.

After he was captured, the Skylanders took him to the Lair of the Golden Queen for his for his Villain Quest with Cali, though had to get past her Spy Guys first. His quest was called "Where is Flynn?", where Cali tasked the mummy to rescue Flynn from the Queen's guards, who holding him captive in a labyrinth. After rescuing the pilot, Grave Clobber was rewarded with Cali's thanks and a new outfit.

Grave Clobber was once a great pharaoh who ruled the Golden Desert long ago. That was until his seven jealous brothers buried him in an underwater tomb while he was sleeping. But the remaining brothers still fought among themselves, and their infighting ultimately led to their kingdom falling apart and the family name being lost forever... almost. Because Grave Clobber eventually rose from his watery grave, and when he discovered what his brothers had done to their kingdom, he hunted each of them down and clobbered them. This was how he came to the attention of the Golden Queen, who now ruled the desert herself. She recruited Grave Clobber into her gang of Doom Raiders, but when the Skylanders defeated them once and for all, Master Eon thought that perhaps there was more to this mummy than meets the eye. He gave the old pharaoh a chance for redemption, and since nobody clobbered better than Grave Clobber, he was the perfect choice to be a Sensei trainer for the Brawler Class.

Grave Clobber can use his large fists for strong punches and cause shockwaves on the ground, and summon spiky bones that can be punched to throw bone shards into enemies. In Skylanders: Battlecast, he can imbue his fists with mud for a round of Fighting Dirty, and gain power from defeated teammates, even ones he sacrifices himself.

In Imaginators, his rocky insides are now full of water and fire off streams when he does a variety of wrestling moves, from punches, to lariats, to belly flops and aerial kicks. Grave Clobber can also summon alligator totems that sprinkle water to reach enemies from afar or to do a powerful vertical suplex. Despite his slow walking speed however, his Sky-Chi shows that his speed lies on his fists, as he throws punches so fast that he absorbs water in waves around him to pull enemies foward. 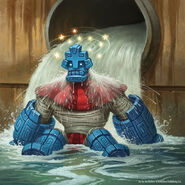 Unused Battlecast Art.
Add a photo to this gallery 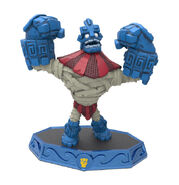 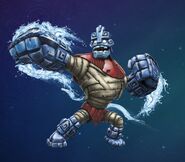 Retrieved from "https://skylanders.fandom.com/wiki/Grave_Clobber_(character)?oldid=115998"
Community content is available under CC-BY-SA unless otherwise noted.