Time of the Giants

“My name's Gigantus and I wanna help too. I might be a little thick-headed but maybe I can show you a few things.”
—Gigantus

Gigantus is a giant Rock Golem introduced in Skylanders: Giants. In the time of the Giants 10,000 years ago, he lived under the watchful eye of the Arkeyans. Even though he's admittedly a little thickheaded, he loves to help and knows a lot of ways to make himself useful.[1] Gigantus appeared 10,000 years ago during the Time of the Giants, helping the the Giants learn what they can do, such as picking and throwing boulders, and jumping down to smash through holes. After jumping into a mine shaft, his whereabouts are unknown. 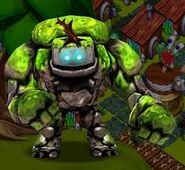