Ghost Roaster, formerly known as Olav, is an Undead skeletal ghoul Skylander in Skylanders: Spyro's Adventure. He is only available for purchase in the Darklight Crypt Adventure Pack.

Ghost Roaster is very curved and skeletal in appearance prior to falling into the Valley of the Undead. His head is skull-like with seeming razor sharp teeth, yellow eyes with orange pupils, and four pointy spikes atop of it. The bones that make up his arm and elbow are completely exposed with four fingers on each hand. He wears a black and almost worn out suit with a red neck collar that exposes the outline of his ribs. In place of legs is his tail which connects to his spiked ball and chain.

Ghost Roaster is known for his relentless, undying appetite for ghosts (particularly evil ghosts). However, being a chef, he is good in the kitchen for making delicious recipes. Despite his scary behavior, he seems unfazed by pranks such as Camo's.[1] In Secret Agent Secrets, Ghost Roaster's flaw is revealed to be a desire to have his work recognized, even if by the side of the villains. Years being put aside in favor of newcomer Skylanders made him bitter towards them, until Stormblade expressed respect for what he did regardless of his threats.

There was a time when Ghost Roaster was neither a ghost nor a roaster. Instead he was a chef living in a village high in the mountains. One day, while clipping wool from a sheep to use in a recipe, he accidentally fell into the Valley of the Undead and transformed into a ghost eating ghoul! After eating an entire spectral village, its Ethereal Ruler chained Ghost Roaster to a spiked ball as punishment -- its rattle heard as he wanders the night, warning nearby spirits. When Master Eon eventually heard of his predicament, he figured even a ghost eater could be useful. So he made Ghost Roaster a Skylander... after he promised to eat only evil ghosts.

Ghost Roaster absolutely loved food. From spectre soup to phantasm fries, he regarded any Undead recipe with relish (and sometimes tops them with relish too). But Ghost Roaster wasn't always a gobbling soul; he was once a simple chef called Olav. Olav lived in a mountain-top village and was said to serve the best sheep-wool stew in all of Skylands (not that anyone had ever tried it anywhere else there). One day, when Olav was wandering the hills searching for sheep (or, more specifically, their wool), he slipped down the mountain side. Luckily he bounced on his behind and made a soft landing in the valley below. Unluckily his bottom was badly bruised. More unluckily still, he had entered the Valley of the Undead, and his days as a friendly foodie were over.

A famished Olav, or 'Ghost Roaster' as he decided to call himself, went in immediate search for a bite to eat. Luckily, a nearby ghost town was spilling over with puffy white spooks - which Ghostie promptly treated as a paranormal all-you-can-eat buffet. Understandably, the town's ethereal ruler was a little irritated to find its inhabitants completely devoured. So, as punishment, he chained Ghost Roaster to a rattling spiked ball to warn any wandering spirits. Taking pity on the skeletal ghoul, Master Eon made Ghost Roaster a Skylander - but only after he swore not to turn Hex into a hamburger.[2]

Ghost Roaster, Voodood, and Boomer were Buzz's elite team of Skylanders when they mysteriously disappeared while on a mission at Motleyville and haven't returned for months. SuperChargers, Spitfire, Stormblade and Nightfall, were assigned to find the lost Skylanders at their last known location. Upon getting ambushed by Spell Punks lead by Spellslamzer, the SuperChargers were suddenly defeated and knocked unconscious by Ghost Roaster, Voodood, and Boomer, who were now working for Spellslamzer.

With the three SuperChargers detained, Spellslamzer announced his plan to raid the Mabu Radiance mines of its rare and powerful minerals, therefore controlling the crystal supply to become the supreme power in all of Skylands. As Stormblade wondered why Voodood, Ghost Roaster, and Boomer would turn their backs on Skylands and Master Eon, Ghost Roaster revealed that he and the other two Elites grew tired of being tossed aside and forgotten while the Skylanders such as the SuperChargers, SWAP Force and the Giants are more appreciated. The ghost Skylander would later stop Spitfire, Stormblade and Nightfall when they attempted to escape and Spellslamzer had the three SuperChargers strapped helplessly to the front of their own vehicles as the evil Spell Punk and his army ride out towards the Mabu mines.

During their attack on the Radiance Mines, Voodood and Boomer turned against Spellslamzer, revealing that all three Elites were pretending to be evil from the start. However Ghost Roaster held onto the belief that he and the Elites would simply be tossed aside and forgotten even if they turn in Spellslamzer; the ghoul remained on Spellslamzer's side, eventually engaging his former friends in battle. He fought against Stormblade and got his ball and chain stuck to the ground during the struggle. Ghost Roaster demanded Stormblade to take him down like any other bad guy, but she refused, reminding Ghost Roaster that he was a hero and someone who takes a special kind of courage to risk so much for no reward.

Moved by Stormblade's words, Ghost Roaster threw his ball and chain at the Radiance crystals under Spellslamzer, blowing them up and knocking Spellslamzer unconscious. The ghoul Skylander returned to the side of good, complimenting Stormblade's heroism and receiving forgiveness for his actions from his fellow Skylanders.

Being a ghoul, Ghost Roaster can turn intangible to avoid enemy attacks, at the cost of his health, before returning to physical form to attack his opponents. He can also turn into a large flaming and speeding skull, and strikes his enemies using his spiked ball tail.

Gain a 20% Speed bonus while in the Radiant Isles. The scroll for this upgrade can be found in Wighthaunt. 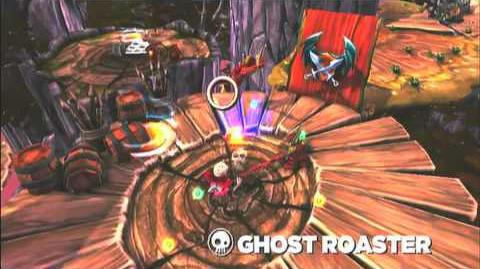 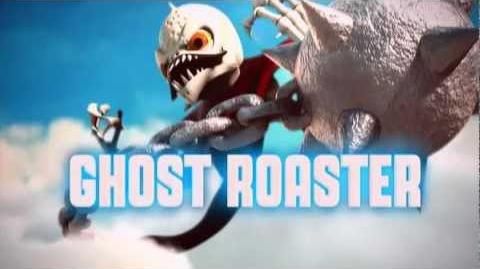