“I'll protect those who I care for!”
—Ring of Heroes

George is one of the default Portal Masters in Skylanders: Ring of Heroes. He is the Shield of Protection.

George’s devoted love for his sister was famous in the neighborhood. It was always George’s job to play with his sister and wait in front of the school gate at the end of the school day. It's common for brothers to consider their little sisters to be bothersome, but George was never like that. Rather, he took the responsibility, saying it was his job, and found it rewarding.

So when he came to Skylands, the first thing he did was worry about Earth and that something bad would happen. He was thinking about his sister. George plans to stop Kaos’s evil plans and return safely to Earth and reunite with his sister. There’s no doubt.

Upon arriving at Skylands, the power of the secret land that had supported the Skylands for a long time senses his strong heart. This secret power, which quietly observes George, gives him the ability that suits him. Now, George is able to create an earthly, solid shield that’s one of the best in the world, hoping to protect his fellow allies, his willingness to defend Skylands, his home and other dimensions, and his sister. When Master Eon saw George use his magic on his ally Skylanders, this is what he said.

“His power is magic that can only be used in Skylands. But if the power is coming from such a strong heart and will... It feels like it could be also used on Earth without magic.”

George uses protection skills to guard ally Skylanders. Though his powers favor the Earth element, he can create a shield using his Skylanders' maximum health.

Concept art of George by LISO 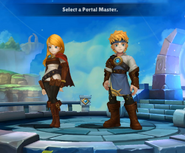 George and Eugenie as they appear in the early versions of Skylanders: Ring of Heroes