General Robot is a robot that presumably helped the Skylanders as their strategist.

General Robot is shown to have a fear of the supernatural and while he acts confident, it is clear that his troops need outside aid in order to accomplish anything. He is the father of Clam-tron 4000, who claims he was a very strict parent when Clam-tron was, "a few quarts of oil younger".

After the Eternal Life Source was restored into the Core of Light, General Robot appeared from a nearby hatch and asked the Skylander for aid in the war against Kaos' Troll army. Using a large cannon as a transportation device, he sent them to Troll Warehouse for the Golden Gear, the Goo Factory for the Green Primordial Goo and finally to the Battlefield for the Eternal Tech Source. 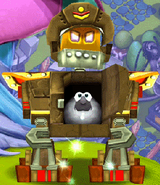