“All Geared Up!”
—Gearshift's official catchphrase

Gearshift is a robot who is one of the Tech Trap Masters in Skylanders: Trap Team.

Gearshift is a tall, humanoid robot with white metal plating and golden coils making up her arms, neck, and abdomen. Her shoulders are topped by a small white gear and her hands are connected by a sleeve-like collar. Her head consists of a circular bolt on each side; blue eyes with red, glowing pupils; and the forehead is embedded with the symbol of the Tech element. Her weapon of choice is a wide Traptanium Gear, with four pegs on each side and two handlebars for Gearshift to handle it. Like all Trap Masters, she has their signature symbol, inside the gear attached to her back.

Gearshift's passion and spirit are an inspiration to her teammates. She's also quick on her feet. [1]

Gearshift was created on the Tech island of Metallana by King Mercurus, who considered the young robot to be his own daughter. But rather than performing royal duties, Gearshift preferred to spend her time in the oily depths of the kingdom among its workers, secretly tending to the huge subterranean machines. When her father discovered this, he was furious - but then a squadron of Undead Stormriders suddenly attacked. Learning that these marauders wanted to capture her father, Gearshift used her knowledge of the labyrinth below to hide him. Seizing the emblem of her people - The Great Gear - she used it to fight the Stormriders, inspiring the workers to rise up. Together, they drove the Stormriders out of Metallana and saved the kingdom. For this, Gearshift was made part of the Trap Team, using her new awesome Traptanium-forged gear to help defend Skylands.

Gearshift was on patrol in Perilous Pastures when she was attacked and overrun by candy warriors led by Pain-Yatta. She barely managed to escape and reached the Skylanders Academy where Mags was able to repair the badly damaged Gearshift. She soon explained to Master Eon, Spotlight and Blackout about what happened to her. After deducing that Pain-Yatta was behind the candy threat using the powers of the Light and Dark element, Gearshift was eager to put a stop to Pain-Yatta's plan despite not being fully repaired. Under Master Eon's orders, she gathered most of the Trap Masters and Rocky Roll to combat the army of Candy Warriors, successfully saving a group of Mabu but were forced to hold out in an abandoned castle.

Seeing the army of candy soldiers at the castle gates, Gearshift rallied her fellow Skylanders in a battle for Skylands. They were able to hold back the candy forces, but the walls were eventually breached, forcing the Skylanders to retreat deeper into the castle. As the Skylanders were becoming overwhelmed, the candy warriors suddenly dropped to pieces, as the Light and Dark Skylanders defeated Pain-Yatta elsewhere. Gearshift, confused about what happened, happily announced to the Skylanders present that they had won the battle. 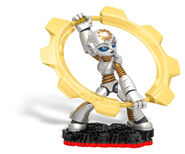 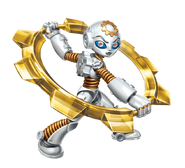 Retrieved from "https://skylanders.fandom.com/wiki/Gearshift?oldid=114962"
Community content is available under CC-BY-SA unless otherwise noted.