“I Have a Bone to Pick!”
—Funny Bone's official catchphrase

Funny Bone is a Skeleton dog who is one of the Undead core Skylanders in Skylanders: Trap Team. He has a St. Patrick's Day themed variant called Fortune Funny Bone.

Funny Bone is very protective. He always knows when danger's afoot. How does he know? Well, let's just say he gets a funny feeling about it.[1]

Funny Bone once lived on Punch Line Island – the funniest place in the Land of the Undead and home of the Eternal Chuckling Trees that magically make everyone laugh when the breeze tickles them. But after hearing stories of this, the evil Count Moneybone sent his minions to investigate if this magic could be used to make a "Funny Bomb" that would render Skylands helpless with laughter. Funny Bone was in the middle of burying his neighbors’ birthday cake on a breezeless day when the invaders arrived. Seeing their large axes, Funny Bone instantly knew that the Chuckling Trees were in danger. Without hesitation, he sprang into action, fighting off the minions and driving them from his humorous home. Now as a Skylander, Funny Bone delivers his own punch line to evil!

Funny Bone, being part of the Undead, possesses bone summoning abilities. He can fling out phantom frisbees to pummel enemies as his primary attack. Later upgrades allow him to chase after the disk and perform a slam attack once the disk is caught. Funny Bone also can charge up a spinning bone saw attack and grind into enemies. His third attack involves digging underground to bring up skeletal bone paws that attack enemies. 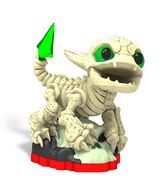 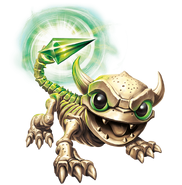 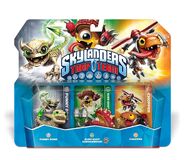 Funny Bone with S3 Shroomboom and Chopper in the Triple Pack