Fright and Rider, also known as Fright Rider and Ozzy, are an Undead jousting team, and one of the core Skylanders in Skylanders: Giants that consists of an Elf and a Skeletal Ostrich.

Gallant and brave, Rider is always ready to rush headlong into action.[1] Together with Fright, they are a courageous pair, honour-bound to right wrongs wherever they roam.[2]

Before becoming one of the Undead, Fright was terrified of pretty much everything. His list of fears included shadows, curtains, certain types of sandwiches and having a jousting spear accidentally plunged into his head. All that changed when he munched a bag of skele-oats so that he could be transformed into a skeleton and rescued Rider. Now he isn't scared of much, apart from getting a spear through his skull. And certain types of sandwiches.[3]

As the Skylanders finished repairing the walls of the Eternal Archives, Fright Rider was mentioned as one of the Skylanders present during its restoration. Gill Grunt was about to sing a song about their accomplishment, but Rider quickly got onto his skeletal steed, Fright, and rode off into the distance to avoid hearing the Gillman's horrible singing.

Fright Rider was one of the Skylanders whose powers were stolen by Kaos when he was empowered by the Mask of Power. As a result, Rider had "given up the ghost" and Fright was weakened from having his power drained. 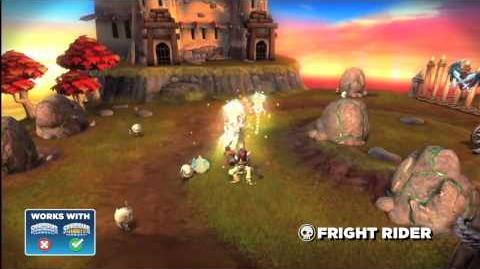 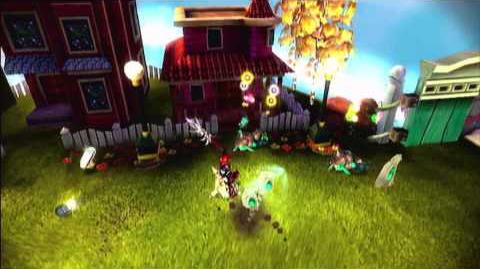 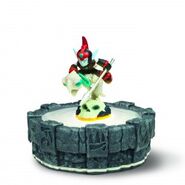 Fright Rider on the Portal of Power 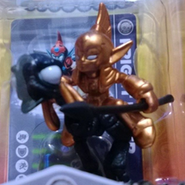 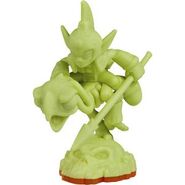 Glow in the Dark Fright Rider 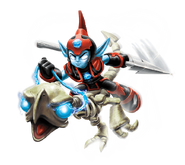 Fright Rider Transparent Render
Add a photo to this gallery

Retrieved from "https://skylanders.fandom.com/wiki/Fright_Rider?oldid=113951"
Community content is available under CC-BY-SA unless otherwise noted.