Food Fight is a sentient artichoke who is one of the Life Skylanders in Skylanders: Trap Team. He is available in the console starter pack of the game along with Snap Shot.

Food Fight was created like most Skylanders, in the form of random doodles. Toy and character director, I-Wei Huang, was trying to come up with a plant-based little critter, and explored lots of different ideas on a page. Food Fight started feeling very cute, but lacking any sense of a "hero", and doesn't look like he would do well in a battle. I-Wei then explored more on the character, trying to find a cool angle to take him. One aspect that he really liked with Food Fight, is the tactile feel of the spiky bits on his head. "There is something very primal about wanting to pick up an object, just to feel it with your fingers. I wanted that to be a big part of him, so he turned into a artichoke-ish character."

After deciding on an artichoke theme, I-Wei Huang played around with more porpotions, and explored different options for Food Fight. The next step was what weapon to give him. Since he is a cute little guy, I-Wei Huang wanted to balance Food Fight out a bit with a cool weapon. He explored through a few different guns types that shoot different veggies. In the end, the team went with something very simple: a Tomato gun.[2]

Early explorations of Food Fight's design, from "a venus flytrap, or hot peppers, infused in a cute plant based character". 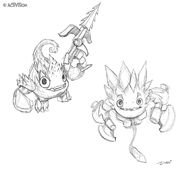 The concept stages of Food Fight's weapon that would eventually conclude with the tomato gun.

Even though he's got a lot on his plate, Food Fight always has time for his teammates. He's an artichoke with a heart of gold.[3]

Food Fight does more than just play with his food, he battles with it! This tough little Veggie Warrior is the byproduct of a troll food experiment gone wrong. When the Troll Farmers Guild attempted to fertilize their soil with gunpowder, they got more than a super snack – they got an all-out Food Fight! Rising from the ground, he led the neighborhood Garden Patrol to victory. Later, he went on to defend his garden home against a rogue army of gnomes after they attempted to wrap the Asparagus people in bacon! His courage caught the eye of Master Eon, who decided that this was one veggie lover he needed on his side as a valued member of the Skylanders. When it comes to Food Fight, it’s all you can eat for evil!

Food Fight, Trigger Happy and Smolderdash battled a rampaging Water Viper that was attacking the Mabu Market. After defeating the creature, they were called back to Eon's Citadel by Spyro and were soon assigned to Wool Mountain by Master Eon to find the Magic segment to the Mask of Power. The Skylanders were soon attacked by Kaos and his Troll Bombers while searching for the Mask of Power piece, but with the efforts of both Spyro and Trigger Happy, they were able to drive off Kaos and find the Mask segment that had taken on the form of a sheep.

Despite losing their powers, the Skylanders were able to defeat Kaos, destroy the Mask of Power, and saved Skylands once again.

When the Minis were touring the Skylanders Academy with Hugo, Food Fight became their Skylander chaperone. While looking around in the Heroic Challenge Arena, Kaos, who was disguised as Weeruptor, sprung a trap upon the young tourists and attacked them with a group of Trolls that were disguised as training dummies. Food Fight helped defend the future students and succeeded in driving Kaos off-campus with his tomatoes.

Food Fight was among the many Skylanders who attempted to stop Malefor from reaching the Skylanders Academy. Despite their efforts, they were defeated by the Undead Dragon King and their powers were absorbed by him via crystal, allowing Malefor to become more powerful. When Spyro destroyed Malefor's crystal, the powers of the Skylanders he stole, including Food Fight's, were returned to their rightful owners.

Food Fight has the ability to replant himself to spawn exploding artichokes, and shoot zucchini and tomatos from his gun. In Skylanders: Battlecast, he has the ability to also shoot grapes from his weapon, and summon large quantities of food to replentish and power up his allies. His Gear is a Ten-Gallon Hat, allowing the active fighter to heal and power up without using additional spells, and his special ability is Fruit and Veggies randomly attacking foe and healing ally.