Flavius is a red dragon who appears in the console versions of the Skylanders series. He is the character who takes you to the Dragon's Peak.

Flavius isn't the brightest dragon, but he is extremely loyal to the Dragon King, Ramses.

After the Skylander confronted Vathek and defeated his minions, the evil dragon was then prompted to face the Skylander himself and jumped off the Dragon's Throne to engage them in battle. Flavius then took his chance to sit on the Dragon's Throne, giving him complete rule over Dragon's Peak. Using the throne's power, Flavius turned Vathek to stone as punishment for betraying Ramses, before giving back Ramses' position on the throne as king. This action made Ramses curious since Flavius could have kept the Throne for himself, but he didn't. Flavius responded that there is only one true king of Dragon's Peak, and that is Ramses himself, until the day he decides to resign as king. Moved by Flavius's loyalty, Ramses then mentioned that when the day he is done with the Dragon's Throne, he knows exactly who will take his place.

When you're playing in Dragon's Peak, at about four points in the level you will find a dragon horn. When you blow the horn, Flavius will come and your Skylanders will jump onto him. You will get to control where Flavius flies to dodge rocks and attack air mines with fireballs. 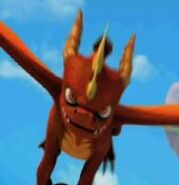