Flashwing is an Earth gem dragoness who is one of the Skylanders in Skylanders: Giants.

Flashwing knows just how beautiful she appears and also how deadly she can be. She often tries to steal the spotlight from her fellow Skylanders, but her kind heart always shines through in the end.[1]

Flashwing's true origins are a mystery. But her first appearance came when Bash made a wish that he could fly and looked up to see a shooting star streak across the sky and in a valley below. In the centre of the glowing impact crater was a large, brilliant geode - which suddenly cracked open to reveal Flashwing. Bash may not have soared that day, but his heart sure did, because Flashwing was beautiful... and lethal. As soon as Bash stepped closer, the gem dragon turned towards him. Not knowing if he was friend or foe, she blasted him off of the cliff with a full force laser pulse from her tail! Perhaps Bash flew that day after all.

It's like the old song says, "When you wish upon a star, you'll probably get blasted by lasers." Well okay, those might not be the exact lyrics, but that's precisely what happened to Bash when he made a wish that he could fly. The moment he made the wish, a shooting star streaked across the sky and crash-landed not far from the awestruck rock dragon. When Bash went to investigate, he found a large precious stone which cracked open as he approached. Out popped the most incredible creature Bash had ever seen - a beautiful, blue and purple gem dragon named Flashwing. Bash immediately fell in love. Flashwing, on the other hand, couldn't tell if Bash was friend or foe, so - just to be on the safe side - she blasted him off a cliff. Since then, Flashwing has gone to be become a valuable member of the Skylanders, and although she has since said sorry to Bash, he's careful to keep his distance just in case.[2]

Flashwing and Scratch were assigned by Spyro to search for Master Eon at Molekin Mine when the old Portal Master was kidnapped by Squirmgrub, who was an agent of Kaos. However, without a Portal Master to operate the Portals, it took long for the two Skylanders to reach their destination.

Flashwing was one of the forty Skylanders that were summoned to stop Malefor from attacking the Skylanders Academy. Under Blades' command, she and the other aerial dragons charged towards Malefor to attack his eyes, but were all swiftly shot down by the evil dragon's powerful flamethrower. Flashwing's powers were then absorbed by Malefor when he defeated the other Skylanders with a single strike of his tail. When Spyro, Cynder and Hex destroyed the crystal Malefor used to steal Skylander powers, the act restored all of the Skylanders' strength and abilities, including Flashwing's.

When Flashwing first encountered Bash, she couldn't tell whether he was friend or foe and blasted him off a cliff. Sometime after she became a Skylander, she apologized to Bash after the incident. Due to her proud nature, she is least likely to admit that she really does like Bash.[1]

Flashwing can shoot crystal shards out of her body and use their reflections as powerful beams, as well as summon a crystalline "lighthouse" out of the ground.

In Skylanders: Battlecast, she can also control the crystals in various ways including the ones used for spellcasting, such as creating shields, a protective crust around her wings and body, rays that return damage dealt to her, and Skylithium scales out of her body that can be used for more spell energy. Her Special Ability is Shield Lattice, and her signature Gear is the Dragon's Circlet, which helps her with additional damage.

Skylanders Giants - Meet the Skylanders - Flashwing (Blinded By The Light) 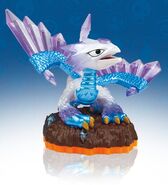 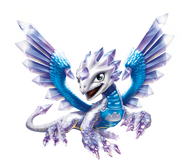 Flashwing Transparent Render
Add a photo to this gallery 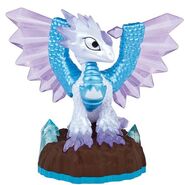 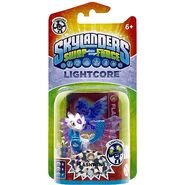 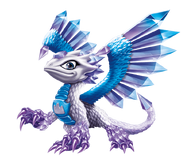 LightCore Flashwing Transparent Render
Add a photo to this gallery 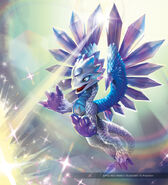 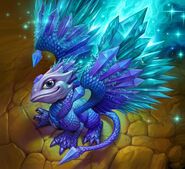 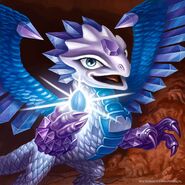 Retrieved from "https://skylanders.fandom.com/wiki/Flashwing?oldid=114514"
Community content is available under CC-BY-SA unless otherwise noted.