Flameslinger is an elf archer Skylander in Skylanders: Spyro's Adventure. He is of the Fire element.

Compared to most of the elves, Flameslinger has slightly darker green skin. His signature outfit consists of a tunic made of light brown scales with a darker brown gorget bordered over the shoulders, a quiver strap over his right shoulder and around his waist, matching gauntlet with two gold buckles on the left arm as well as a shoulder guard, brown pants and yellow flat boots. He also wears a red blindfold and his blue hair is tied up into a tuft with a gold hairband.

Flameslinger is an elf who has the impression of being a show-off, having put on a blindfold to prove that he is an excellent archer with incredible aim. Despite this cocky image, he possesses a courageous heart, having saved a fire spirit from a watery fate when he was young.

Flameslinger is an Elven archer with incredible aim. In fact, he is so good that he wears a blindfold just to prove it. When he was young, he rescued a fire spirit from a watery doom and was gifted an enchanted bow and magical fire boots that he now masterfully uses to defeat evil throughout Skylands. With the scorched earth he leaves behind, you can always tell where he has been.

Elves are often said to have a sparkle in their eyes, but Flameslinger was born with an entire bonfire. And the fire in Flameslinger's eyes was more than just a handy way of heating the house. It gave the young elf the mystical ability to see incredible faraway places. Wherever fiery flames exist, this remarkable elf can use them as an extension of his very own eyes. Flameslinger soon became the talk of the town, and the neighboring town, and the town three towns over. But he soon tired of visiting rubberneckers. He wrapped his eyes in a blindfold and slunk stealthily off into the forest. Here, he would practice blindfolded archery by bullseyeing Bomb Fiends with his bow.

Then one day in his mind's eye he saw a drowning fire spirit in a nearby pond. Quicker than wildfire, Flameslinger sprinted to the struggling spirit and saved him from a watery grave. A fiery friendship was instantly formed and the spirit gave Flameslinger two gifts - magic fire boots for lightning quick speed and an enchanted bow that shoots flaming arrows. Soon, Flameslinger was back in the public eye, holding blindfolded archery tournaments and winning every time. His performance caught the eye of a certain special spectator, Master Eon, and the rest... well, the rest was Skylands history![1]

Under Spyro's orders, Flameslinger was assigned with Wrecking Ball to accompany Stump Smash to the Giggling Forest to investigate its sudden change in behavior. When they discovered Glumshanks half petrified, they came under attack by a Bone Dragon. Flameslinger volunteered to distract the angry beast while the others carried Glumshanks to Flynn's air balloon, but the elf archer had his bow turned to stone. The escape attempt failed when the Bone Dragon petrified Flynn's air balloon, leaving the Skylanders open for attack. Before the Bone Dragon can finish them off, the beast was driven away by Wrecking Ball's belch attack, allowing the Skylanders to safely send a distress signal which was noticed by Lightning Rod.

Flameslinger was among the forty Skylanders to fight against Malefor, he along with several other Skylanders were part of the artillery unit, under Buzz's orders they fired at the Malefor, which had no effect. The Dragon King then destroyed most of the Academy, leaving Flameslinger and many other Skylanders unconscious, and had their powers stolen by Malefor.

Flameslinger has the ability to infuse his arrows in flames and launch them at his enemies with his enchanted bow. His magic boots allow him to run at incredible speeds, and leave a trail of fire behind him. When he circles around an enemy while leaving a trail of flames, a torrent of fire erupts around the enemy, burning them.

Choosing the Marksman path further increases Flameslinger's capabilities with his Bow and Arrow. His Hellfire Arrows upgrade increases the damage output of the arrows, Explosive Arrows damage nearby enemies rather than just a single enemy, and Triple Shot Arrows increase the range of fire. All of these upgrades combined create a considerably powerful Bow and Arrow attack.

Choosing the Pyromancer path gives Flameslinger more abilities in ways of indirect damage and trickery. The Napalm Tipped Arrows upgrade is a good way to set chaos among the field of battle, setting fire wherever Flameslinger's arrows land. His Inferno Blast is good for the first strike but not necessarily great in the heat of battle; it is best to charge this attack at the beginning of a battle and to only use it when the user is certain of safety while charging it. The Supernova upgrade is excellent for its ability to wipe out surrounding enemies that are far apart. This path is good for players who are more strategic and less focused on raw damage.

Gain a 20% Health bonus while in the Radiant Isles. The scroll for this upgrade can be found in Glacial Slopes. 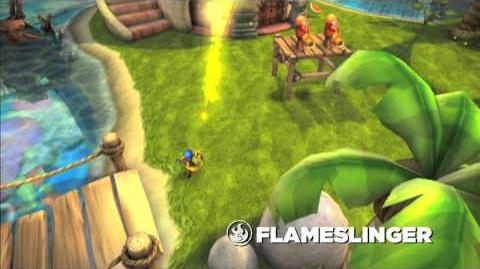 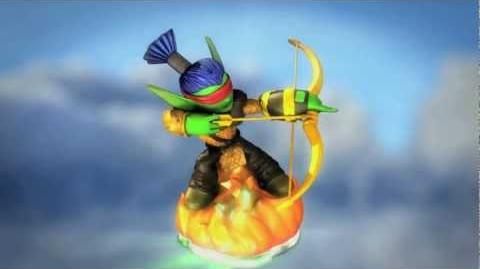 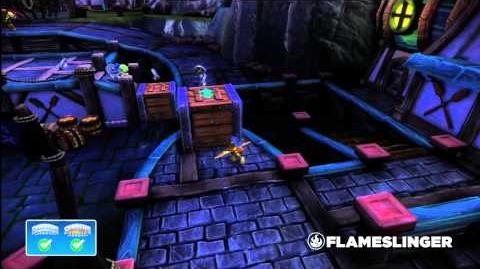