Fisticuffs is an Evilikin who is one of the Dark elemental villains in Skylanders: Trap Team. He was summoned by Verl and the other Gillmen in the Secret Sewers of Supreme Stink to help determine whether the Skylanders were actually Skylanders. Though Verl had already seen enough, he let Fisticuffs attempt to prove his might against them anyway, since he was called in advance. In the end, his extending arm proved insufficient, as Fisticuffs was defeated and trapped.

Fisticuffs confronting the Skylanders in the Secret Sewers of Supreme Stink 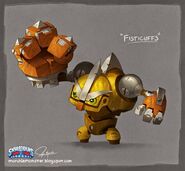