Fist Bump is a rock panda who is one of the Earth core Skylanders in Skylanders: Trap Team.

Fist Bump is always the first person to shake things up at a party. He loves to get loose and rock out.[2]

Fist Bump had long been the sleeping protector of the Bubbling Bamboo Forest, but awoke from a long hibernation when a horde of nasty purple Greebles arrived with gigantic rock-smashing machines. Intent on building a new base, their machines wreaked havoc – chewing up the land and spitting out billowing clouds of smoke into the enchanted air. Seeing this, Fist Bump was furious. Using his enormous stone fists, he hammered the ground with all his strength, creating a massive earthquake that sent huge shockwaves towards the Greeble camp. This reduced the machines to mere scrap and sent the Greebles running off in a panic. The act of bravery caught the attention of Terrafin, who brought Fist Bump to meet Master Eon. Now as a Skylander, Fist Bump makes evil quake wherever he goes!

Fist Bump, along with Trail Blazer and Fling Kong, served as the final opponents in the Legendary Tournament. The trio of Skylanders mocked and discouraged Déjà Vu, who made it to the Finals, by claiming that she was out of their league and that the finals were only for Skylanders who can "handle heavy combat". As the final round began, Fist Bump teamed up with Trail Blazer and Fling Kong to defeat Déjà Vu, not wanting her to win so that they can be only ones left to battle amongst themselves. In the end, all three Skylanders underestimated the Magic Skylander, who used exploding duplicates to surround Trail Blazer, Fist Bump and Fling Kong and knocked them out. Déjà Vu is crowned the new Legendary Champion, and Fist Bump apologized to her for his behavior along with Fling Kong and Trail Blazer.

Fist Bump can utilize his enormous strength in combat, being able to create fault lines and earthquakes just by punching the ground. When his fault lines are activated by his panda pound, spiky rocks erupt from them that damage enemies. Fist Bump can even slide across the ground, which damages enemies in his way, and creates fault lines. 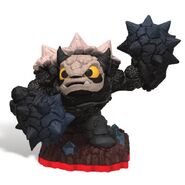 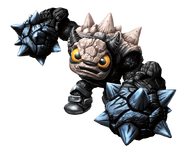 Fist Bump Transparent Render
Add a photo to this gallery

Retrieved from "https://skylanders.fandom.com/wiki/Fist_Bump?oldid=116150"
Community content is available under CC-BY-SA unless otherwise noted.