The Fire Viper is a large snake-like monster who serves as one of the bosses in Skylanders: Swap Force. This particular Viper was summoned by Kaos to stop the Skylanders at Twisty Tunnels.

Apart from loyally serving Kaos, the Fire Viper seems to possess a childish demeanor, taking every chance to taunt and insult the Skylander while making their mission difficult.[1] However, it does have a serious side, as when the Skylanders saved the Terrasquid (a task the Fire Viper attempted to prevent from happening), it attacked Sharpfin and the Skylanders.

The Fire Viper shares its kind's ability to fly, as well as the power to breathe fire and blast fireballs at its opposing enemies. It can also create spiked lava spheres that move around the area.

The Fire Viper was summoned by the evil Portal Master, Kaos, to stop the Skylanders from attempting to save the Ancient Terrasquid at Twisty Tunnels. Although it coughed indestructible lava spheres to deter them through their trek across the area, the Skylanders managed to destroy the Evilizer Crystals around the tunnels and save the Terrasquid. 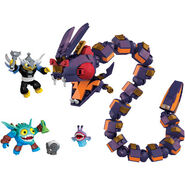 The Fire Viper taunting his prey atop Serpent's Peak

Environment concept art of the Skylander Eruptor going down the volcanic gullet of the Fire Viper.
Add a photo to this gallery

Retrieved from "https://skylanders.fandom.com/wiki/Fire_Viper_(Boss)?oldid=115098"
Community content is available under CC-BY-SA unless otherwise noted.