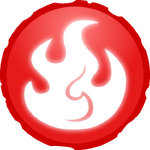 Fire is one of the ten main elements in the Skylanders series. It is commonly associated with the color red and shades of orange closer to it, such as vermilion.

Fire is one of the most ancient sources of power in all of Skylands; even Hugo's research suggests that it existed even before written records began. Being the brightest of the elements, Fire plays an important role in helping keep The Darkness at bay. Skylanders powered by the Fire Element, such as Flameslinger and Eruptor, have proven highly effective in defending Skylands from the evil Kaos.[1]

When Earth Portal Masters were taken from their homeworld into Skylands, Portal Master Ryeo became the Fire specialist.

Water is the natural enemy of Fire, and Fire Skylanders must be extra cautious when dealing with the Water Element, or they may find their flames well and extinguished.[2] In Skylanders: Ring of Heroes, Fire is strong against Air and Undead, but weak against Water and Tech.

Skylanders who are associated with this element uses the manipulation of fire to burn down and sear their foes. They can travel through lava unharmed and can use furnaces as teleporters after opening a Fire elemental gate. Fire Skylanders can also light up dark areas in certain levels (such as Darklight Crypt) with their attacks. Their abilities can defeat the Rotting Robbies (who can only be harmed by fire and cannons). Fire-based Skylanders stand on a pedestal made of flames when they're in their toy form.

In the turret sections of Skylanders: Trap Team, Fire Skylanders can use the ability Inferno, which defeats enemies instantly with an explosion. In Kaos Doom Challenge, their towers are furnace-powered flamethrowers, which can be upgraded into having even more fuel and bellows for hotter fire.

In Skylanders: SuperChargers, Fire-aligned Portal Master Powers include a damaging flame aura, attack boosts, and searing steam. Those are distributed in several conditions, and the names are as follows:

Fire Imaginators can choose four abilities as their secondary attack:

The default color schemes for Fire Imaginators include Flame Strike, Crimson Flame, Hot Stuff, Spicy Mustard, Candle Light, Sizzle Spark and Magna Might. Parts unlocked by Fire Creation Crystals are from the Fire Dancer set, including a full tattooed body with many ornaments and a feather headpiece.

Fire Spells are used for raw, continuous damage. Either by lingering and fixed damage, blocking healing and encouraging multiple spells in one turn, they are an asset in taking down single enemies quickly.

The scrapped Fire team spell is the Column of Fire, summoned by the Fire characters of the team and causing more damage the more there are on it.

The Fire Skylanders introduced in Skylanders: Giants featured on one of the loading screens of Skylanders: Universe