“I've Got My Eye On You!”
—Eye-Small's official catchphrase

Eye-Small is one of the four Sidekicks in Skylanders: Giants. He is the miniature counterpart of the giant Eye-Brawl, eventually becoming a Mini Skylander in Skylanders: Trap Team.

Eye-Small may look like a cute little cyclops, but he'll jump into a fight at the bat of an eye. He's a scrapper like that. Eye-Small pays keen attention to detail. He notices just about everything. He is an eyeball, after all.[1]

The Skylander Minis started off as regular "Sidekicks," assisting the Skylanders on many exciting adventures. And what they lacked in size they more than made up for in courage. Ultimately determined to become full-fledged heroes, they trained at the Skylands Academy - honing their powers and skills until they were ready. Now, they stand side by side with their full grown counterparts, ready to defend Skylands against Kaos and his evil minions.

Meet the Skylanders Eye Small
Add a photo to this gallery 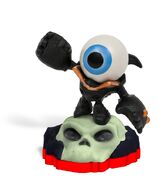 Concept art of Eye-Small in the 3DS version of Skylanders: Trap Team.
Add a photo to this gallery

Retrieved from "https://skylanders.fandom.com/wiki/Eye-Small?oldid=104141"
Community content is available under CC-BY-SA unless otherwise noted.