The Eternal Archives is a large structure in Skylands that houses every book that has been published from every corner of the universe. It also holds the most dangerous books ever written, which are protected by the guardians and curators of the Archives, the Warrior Librarians, founded by Pomfrey Lefuzzbottom.

The Archives is stated by Wiggleworth to contain books that are powerful, magical and evil. Books make up most of its architecture, from bridges to walls and even doors, with some sentient books even helping visitors on their own. Like Boom Town, it contains its own Portal of Power, which looks much more ancient and damaged than previously seen ones.

The Eternal Archives were attacked by mega-sized Chompies unleashed by Kaos, who attempted to steal a book from the Archive about world domination. The Skylanders were fortunately enlisted by the Warrior Librarians to help protect the books inside the Archive walls, and were successfully able to defeat the Chompies and drive Kaos off. During the quest for the Mask of Power, it was a center of operations where Master Eon discovered the whereabouts of its pieces up until the events of Stump Smash Crosses the Bone Dragon when the Archives became an unsafe place to secure the Mask fragments.

The Archives eventually reappeared as the hub world for the Nintendo 3DS version of Skylanders: Trap Team. It held a cursed book that makes the reader fall asleep when read, and allowed the Nightmare Villains to find their way from the Realm of Dreams into the real world, and where they started their attempt at world conquest. With the help of the Warrior Librarians and sentient books, the Skylanders used gates inside it to track down the villains and find the means to stop the Dream Sheep from putting all of Skylands to sleep. 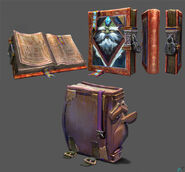 Concept art of the Archives' sentient books by ATaraky

Retrieved from "https://skylanders.fandom.com/wiki/Eternal_Archives?oldid=125345"
Community content is available under CC-BY-SA unless otherwise noted.