View source
watch 02:17
New Pokemon Games - The Loop
Do you like this video?
Play Sound

Eon's Elite are a group of Skylanders originated from Skylanders: Spyro's Adventure that stand atop golden bases with a transparent bottom, who are three times stronger than their normal forms. Their release began during Skylanders: Trap Team, with repainted versions of Series 1 figures. During Skylanders: SuperChargers, a second set of Eon's Elite were released, featuring new reposed figures with different accessories.

Each of these special edition toys were offered in premium foil packaging, featuring a display case with a 3D lenticular background. Additionally, when played in-game, Eon's Elite will be up to three times as powerful as other characters, which represents the biggest in-game boosts ever incorporated into a Skylanders toy to date.

Of all the heroic Skylanders, there are several that Master Eon depends on to lead others into battle against the forces of evil. Eon’s Elite are the selected few that have displayed courage and bravery against all odds – and are revered by their fellow Skylanders for their inspiration and unwavering commitment to defend Skylands! 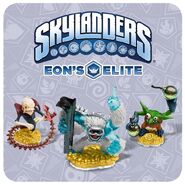 Some of the Eon's Elite for Skylanders: SuperChargers 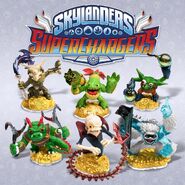