“Out of Sight!”
—Enigma's official catchphrase

Enigma is a mysterious being who is one of the Magic Trap Masters in Skylanders: Trap Team.

Enigma is a mysterious humanoid blue skinned figure whose face is completely concealed by a red hood with the signature Trap Master symbol.  He wears a large red cloak with a yellow patterns and a red vest with matching pants that are held by a gold buckled-brown belt, as well as brown wrist bandages and matching boots. His Traptanium Sigil is a large U-shaped staff with a large eyeball in between.

Sometimes Enigma can be difficult to figure out. He's kind of like a puzzle.[1] Despite his reclusive nature, he possesses a courageous side as he willingly sacrificed his only gateway home to prevent the Darkness from entering his realm. In Ring of Heroes, he's inquisitive and spares no compliments for those who deserve it, but keeps it to himself when it comes to teamwork and focuses on the larger picture when it comes to villains.

Summoned by a Mabu Mystic, Enigma comes from a nameless place "between the worlds." Though the Mystic was really just looking for someone to play Skystones, he was quickly enraptured by Enigma's stories about his mysterious homeland. Unfortunately, the Darkness got wind of these stories, and seeking another realm to conquer, sent minions to lay siege on the gateway that remained open. Making matters worse, the Mabu had no idea how to close it. So, with a legion of minions fast approaching, Enigma chose to use his Sigil of Mystery to seal the doorway – cutting him off from his home forever. This large sacrifice caught the attention of the Trap Team, who welcomed Enigma and gave him a new home as a protector of Skylands. He now uses his Traptanium Sigil to put a world of hurt on evil everywhere!

Enigma took part in the fight against Pain-Yatta's army of candy warriors. Lead by Gearshift, he and several other Skylanders fought a group of candy soldiers to save three Mabu before retreating into an old castle fortress to hold out when the army began to grow in numbers. As they were cornered by the candy army within the fortress, Enigma and the other Skylanders served as Skylands' last line of defense, battling Pain-Yatta's army with all of their might. The candy army soon fell to pieces just as the Skylanders were becoming overwhelmed (thanks to the actions of the Light and Dark Skylanders in their fight against Pain-Yatta), earning the heroes their victory.

After the Earth Portal Master, Cali, Flynn, Hugo and the Skylanders reached the end of Rainbow Valley, Enigma approached the Portal Master, with intent to test their worth. For most of the Part 2 Quests, Enigma gives out advice and directions for them to take, interested in villain movements around the islands. 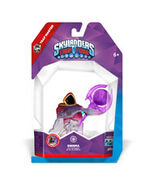 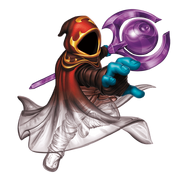 Engima in Ring of Heroes.

Retrieved from "https://skylanders.fandom.com/wiki/Enigma?oldid=117571"
Community content is available under CC-BY-SA unless otherwise noted.