At the end of the console version of Spyro's Adventure, Kaos was banished to Earth where he was soon tormented by a dog.

It is revealed that the Giants were banished from Skylands to Earth after they defeated the Arkeyans 10,000 years ago. In the present, the Skylanders are still trapped on Earth in toy form; some having been put inside a display in a toy store called Super Toy Planet. Kaos however, broke free of his frozen state due to his status as a Portal Master and used a Portal of Power on a toy display to return to Skylands.

During an epic battle, a brave group of Skylanders were caught in the eruption of a mystical volcano in the Cloudbreak Islands. The result blasted them apart and sent them to Earth. But, the magic of the volcano gave these heroes a remarkable new power -- the ability to swap halves -- turning them into a special team known as the SWAP Force.

The Trap Masters serve as the guards of Cloudcracker Prison to prevent the most notorious villains of Skylands from escaping. However Kaos blew up the prison and sent both the Trap Masters and the Traptanium down to Earth, releasing the villains in order to strengthen his dark army.

With the Sky Eater at his disposal, Kaos was able to sever the Portal network that link Skylands to other worlds including Earth. He announced his victory over Skylands to the player and proceeded to cut them off from the realm, stranding the Skylanders on Earth and leaving the Portal Master without a means to reach Skylands. Luckily, Hugo was able to create a rift into Skylands, allowing the player to transport their Skylanders to fight against Kaos and his newest threat.

Due to an every-20-years occurrence, Skylands converges with the Thumpin' Wumpa Islands, which according to Crash Bandicoot lore are a fictional archipelago on Earth. However, the Synchronization Celebration is disturbed when Dr. Neo Cortex and Fake Crash's meddlings disrupt the Vibes of the islands.

Five Portal Masters from Earth, Eugenie, George, Ryeo, Bruno, and Oscar, were pulled from their homeworld and into Skylands when Kaos accidentally caused unstable rifts that transported them between dimensions. Though they were sent back to Earth with the help of the Skylanders and Master Eon, the portal link stayed open, allowing them to come and go to Skylands as they please. 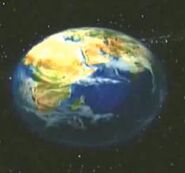