Dune Bug is a Magic beetle Skylander who appeared in Skylanders: Swap Force.

Hailing from a race of beetles changed by the powerful secrets hidden in a buried Arkeyan city, Dune Bug was next in line to become the defender of those secrets. As a small pupa, Dune Bug and his father would travel to the ruins where he learned to read the ancient writings using his father's magic staff. On the day Dune Bug was to be given his own magic staff, the city fell under attack by the evil Sand Mages of Doom, who were after the secret Arkeyan tomes. Knowing what he had to do, Dune Bug used his magic to defeat the Mages and bury the city deeper into the ground until it was forever out of their reach. Dune Bug earned his magic staff that day - and a place alongside the Skylanders.

Using magic to mutate beetles sounds like a recipe for disaster, but when ancient Arkeyan secrets did just that, things somehow worked out for the best and a noble bug race was born. One young beetle, by the name of Dune Bug, dedicated himself to guarding those Arkeyan secrets from the forces of darkness. When evil came calling, Dune Bug sent it packing, and drove his city deeper underground where it remains safely out of harm's way.[1]

Use new magic staff attacks to dish out damage to enemies!
Trap enemies in more powerful spheres of magic! 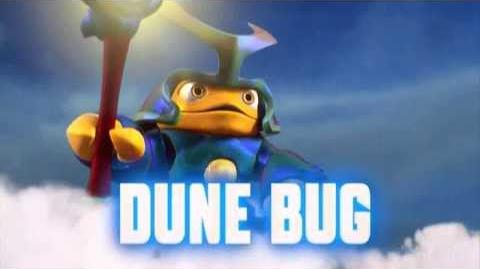