Drobot is a Tech dragon Skylander who wears a robot suit. He first appeared in Skylanders: Spyro's Adventure. He is also featured in the second Episode Dungeon in Skylanders: Ring of Heroes.

Exceptionally intelligent, Drobot is driven by logic and the pursuit of knowledge. He can turn his hand to any technology and is ferocious in battle.[2] A super-genius, Drobot analyses everything he comes across. While he seemed cold and calculating at first, the Skylanders soon discovered that he is as brave as he is intelligent.[3] Drobot may be smart, but he never shies away from a fight. Instead of waiting to be invited to be a Skylander, Drobot sought out Master Eon and offered his services.[4] Like many dragons, he also has a sense of humor and uses his knowledge to come up with new pranks.

Dragons are smart, but none so much as Drobot. He was born in the highest reaches of Skylands, where dragons spent all their time competing in aerial battles. But Drobot was more interested in taking things apart to see how they worked. While exploring one day, he came upon some mysterious technology, which he used to assemble a robotic suit. Features include laser beams that shoot from his eyes, flight enhancement technology, a vocal synthesizer that gives him a deep booming voice, and the ability to shoot spinning gears. With such power – more than most other dragons – Drobot joined the Skylanders to help protect the residents of Skylands.

As a young dragon, Drobot often felt like an odd one out. While his friends focused on flying, fighting and aerial frolics, Drobot spent his time studying gadgets and gizmos. One day, the inexperienced flyer was caught in a terrible tailwind and forced down to a desert island. To his surprise, he found himself surrounded by magnificent machines, amazing appliances, and clever contraptions. At once, he made the island his widget workshop. Before long he had built himself a brand spanking new robotic flying suit with sensational super powers. A vocal synthesizer gave his voice a deep sonic boom, his eyes fired laser beams and he could shoot spinning gears at lightning speeds. Nowadays, Drobot is a dragon master supreme when it comes to sparring in the skies. And, with his homeland suddenly starting to feel a bit small, Drobot flew out to seek a certain Portal Master and sign up as a Skylander.[5]

Drobot was among few of the the Skylanders who participtated in attending the Annual Storm Titan Games to see Lightning Rod in action. Just as the event had begun, Lighting Rod's hammer accidentally hit Flynn's air balloon that was flying overhead, causing it to spiral out of control and sending debris everywhere. Drobot quickly dispatched to stop the balloon from crashing, succeeding in saving Flynn, Hugo, Double Trouble, and Squirmgrub.

When the Air segment to the Mask of Power was said to be in the form of the last Land Whale held within Tempest Towers, Drobot went with Lightning Rod, Pop Fizz, Double Trouble, Cali, and Flynn to retrieve it before Kaos could have the chance. However Kaos already knew the location to the Air segment and captured Cali for the path to the Towers. Thanks to Drobot's supercharged Afterburners, the Skylanders were able to whizz past Kaos through the Sea of Storms and reach their destination, despite Drobot's malfunctioning afterburners. As Double Trouble and Flynn kept a lookout for Kaos, Drobot came with Lightning Rod and Pop Fizz to get into the Cyclops city where the Land Whale resided in a collection of animals imprisoned by the Cyclops Queen. However the Skylanders were discovered, and the Cyclops Queen had Drobot and Lightning Rod thrown in the tank with the Land Whale to be eaten.

When the Land Whale was hypnotizing Lightning Rod into going towards its open jaws to be devoured, Drobot quickly distracted the beast in an attempt to save his companion, but nearly got eaten as a result. The robotic dragon was quickly pulled from the Land Whale's slobbering jaws by the freed Lightning Rod, and they made their escape from their imprisonment with Pop Fizz.

Outside the tower, the Skylanders saw Kaos and his army of Drow battling against the Cyclops Queen's forces, with Kaos winning the struggle. When Lightning Rod hurled the Land Whale far from Tempest Towers with Kaos giving chase, Drobot was confused to why the Storm Giant would throw away the Air segment. They immediately discovered that the Air fragment wasn't the Land Whale itself, but was really one of the towers of the Cyclops city, which was made of Cyclopnite, the heaviest stone ever mined, and the opposite of the Air element. With the help of a humungous Lightning Rod, the Skylanders returned to the Eternal Archive with the tower, and claim the Air segment to the Mask of Power, unaware that there was a traitor in their mist revealing the location of the Mask fragments to Kaos: Squirmgrub.

Even Drobot's powerful, flight-enhanced robotic suit could do nothing to prevent him from joining the other Skylanders in frozen exile when Kaos destroyed the Core of Light. He no doubt spent much of his time thinking up new gagdets to break the spell that locks him in toy form.[6]

Drobot was one of the forty Skylanders that were summoned to stop Malefor from attacking the Skylanders Academy. Under Blades' command, he and the other aerial dragons charged towards Malefor to attack his eyes, but were all swiftly shot down by the evil dragon's powerful flamethrower. Drobot's powers were then absorbed by Malefor when he defeated the other Skylanders with a single strike of his tail. When Spyro, Cynder, Hex and Wallop destroyed the crystal Malefor used to steal Skylander powers, the act restored all of the Skylanders' strength and abilities, including Drobot's.

Drobot can shoot powerful rapid fire lasers from his eyes and wings, and fire rotating gears from his wings that ricotchet off of surfaces. He can also fly after being upgraded with thruster flight, and it can be further upgraded with afterburners.

Gain a 20% Health bonus while in the Radiant Isles. The scroll for this upgrade can be found in Daystar Temple. 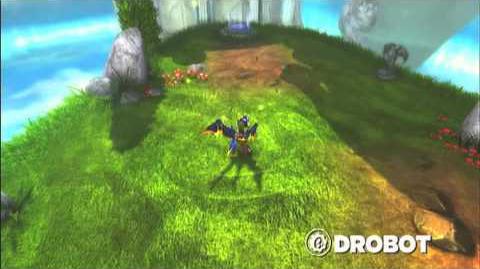