Drill Sergeant is a train-like, drilling Arkeyan machine who is one of the playable Tech Skylanders in the Skylanders series, first appearing in Skylanders: Spyro's Adventure.

Drill Sergeant was built and programmed to obey orders, which results in him calling everyone 'sir', which irritates some of his comrades. He follows rules to the letter, never wavering until the job is done.[1] As a valued member of the Skylanders, he is a free machine, answering to no one, but old habits of his Arkeyan programming hasn't yet diminished. Like all Tech Skylanders, Drill Sergeant is fascinated by machinery.

Like many Arkeyan artifacts, Drill Sergeant was buried for centuries – a long forgotten remnant of an ancient powerful civilization. It was only a chance collision with a burrowing Terrafin that led to his systems firing up again. By Arkeyan custom, Drill Sergeant was then obligated to become Terrafin’s servant. This didn’t sit well with the dirt shark, so his first order as master was for Drill Sergeant to not serve him at all… a command he continues to follow zealously to this day.

Drill Sergeant is an ancient piece of Arkeyan apparatus, once left to rust underground. Thousands of years later, Skylands dirt shark Terrafin was burrowing through the earth when he struck something solid. Terrafin tugged the artifact above ground and dragged it off to show Master Eon. Eon muttered a few magical phrases. There was a clunk, then a whirr, and then... KACHUNK! Drill Sergeant clattered to life with lights blazing and engine revving, Drill Sergeant turned his attention to Terrafin. By Arkeyan law, he was sworn to serve the shark for all eternity. Terrafin's first order was simple: 'STOP FOLLOWING ME.' But it's one that Drill Sergeant has found tricky to compute.

Without an Arkeyan in sight, Drill Sergeant found Skylands a bit senseless. So Eon signed him up, and his drills are now used for death blows against evil.[2]

Drill Sergeant was one of the Skylanders who was in a training session with Spyro, Trigger Happy, and Jet-Vac within Eon's Citadel, but the the training ended with Drill Sergeant and Trigger Happy being singed by Spyro's flames. The Arkeyan bulldozer was later sent to the Giggling Forest to deal with two, mega-sized Sheep that was eating up the leaves of the trees. Before he could land a hit on the sheep, Kaos arrived after claiming he was renouncing his evil ways to battle evildoers, and used his magic staff to banish the sheep.

The Arkeyan bulldozer soon went with Spyro and Jet-Vac to the Desert of Columns to save Diggs from a mega-sized, yet familiar troll, only for Kaos to save the day again. Drill Sergeant later accompanied the other Skylanders with the Warrior Librarians of the Eternal Archives to stop Kaos from reaching the archive that contains a dangerous book.

While in frozen toy form, Drill Sergeant's first thoughts must have been "Oh no! Not again!". After spending thousands of years with his "off" button pressed and unable to move, being frozen in space must have been his worst nightmare. Just as those drills had begun to roll, like in the good old days, they were forced to cease once again.[3]

Gain a 20% Speed bonus while in the Radiant Isles. The scroll for this upgrade can be found in Sunblight Wood. 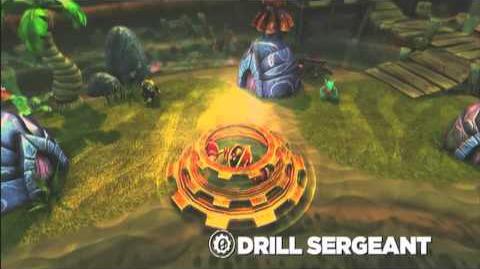 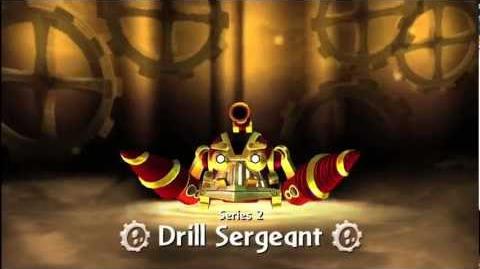 Drill Sergeant in his upgraded armor. 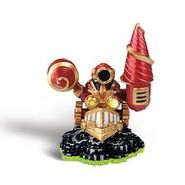 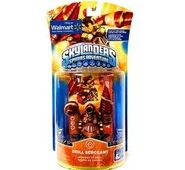 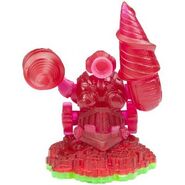 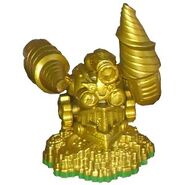 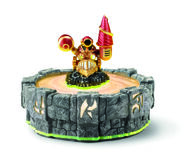 Drill Sergeant on the Portal of Power

Drill Sergeant in a triple pack with Whirlwind and Double Trouble.

Drill Sergeant Transparent Render
Add a photo to this gallery

Series 2 Drill Sergeant in his box 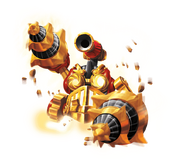 Drill Sergeant Transparent Render
Add a photo to this gallery

Retrieved from "https://skylanders.fandom.com/wiki/Drill_Sergeant?oldid=112187"
Community content is available under CC-BY-SA unless otherwise noted.