Dreamcatcher is very mischievous and enjoys driving others insane with her dream manipulation, though when confronted she will make petty excuses for her cruel behavior. She has the attitude of a stereotypical teenage girl, occassionally speaking with text phrases such as "OMG" and "TTYL". She is also bothered by people who actually enjoy her nightmares, and reacts with more violent pranks to enjoy messing with them.[2] 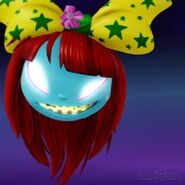 Retrieved from "https://skylanders.fandom.com/wiki/Dreamcatcher?oldid=106694"
Community content is available under CC-BY-SA unless otherwise noted.