View source
watch 02:05
Wiki Targeted (Games)
Do you like this video?
Play Sound

Dragonets are dragon-hornet hybrids that appeared in the console versions of Dragon's Peak. When Vathek took over the Dragon Throne and became king of Dragon's Peak, the Dragonets became loyal to the evil dragon by Dragon Law, making them enemies to the Skylanders. They attack by shooting fireballs from their stingers. 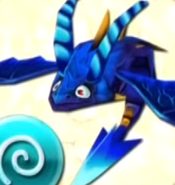