The dragon knight, Flavius, sought the Skylanders to help him free his King from the clutches of the Undead dragon, Vathek, and usurp him from the throne. After arriving in Dragon's Peak, Flavius explained to the Skylander the events that led to Vathek's rule over the Peak. Previously, the red dragon knight convinced King Ramses to go flying with him, but while they were away, Ramses' evil brother, Vathek, sat on the Dragon's Throne, making him ruler of Dragon's Peak by Dragon Law. Using the power of the Throne, Vathek cursed Ramses, turning him into stone, and Flavius blamed himself for what happened.

As the evil dragon summoned all of the minions the Throne can muster, the Skylander emerged victorious despite the mass amount of enemies. Enraged, Vathek leaped off of the Dragon Throne to deal with the Skylander himself, but as it would seem a fight was about to begin, Flavius appeared and took the Throne, making him king by Dragon law and rendering Vathek completely powerless. As Vathek exclaimed in disbelief that he fell for the oldest trick in the book, Flavius used the Throne's power to turn Vathek into stone as punishment for betraying Ramses.

After the battle, Ramses returned to his position as King and pondered about what to do with Vathek, at first suggesting banishment, but dismissed the idea when Flavius mentioned that the frozen Vathek makes a ' good statue'. The Dragon King then became curious as to why Flavius didn't keep the Dragon's Throne for himself when the dragon knight had the chance. Flavius replied that Ramses himself is the only true king of Dragon's Peak and that the Throne was his until the day he decides to resign. Moved by Flavius's loyalty, Ramses then mentioned that when that day comes, he knows exactly who will take his place. The elder dragon then expressed his gratitude to the Skylander for their help, and has Flavius take them back to the Ruins.

This area is similar to the entire level in the console versions of Dragon's Peak. As you near the end, you confront Vathek.

This is an arena level involving Collecting 180 coins as the main objective although side challenges include avoiding Dragonfire and defeating at least 50 Enemies. This also has a hidden gift which floats on one of the fruit balloons. 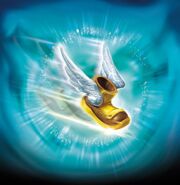 Retrieved from "https://skylanders.fandom.com/wiki/Dragon%27s_Peak?oldid=116785"
Community content is available under CC-BY-SA unless otherwise noted.