Dr. Neo Cortex is a professional scientist born in Peoria, Illinois, and is the main antagonist of the Crash Bandicoot series. He is Crash Bandicoot's arch-nemesis and creator, and has been seen throughout the series with colleagues such as Dr. Nitrus Brio, Dr. N-Gin, Dr. Nefarious Tropy, and his master, Uka Uka; animal henchmen such as Tiny Tiger and Dingodile, and his niece Nina Cortex.

In Skylanders: Imaginators, Neo Cortex is one of the Tech Senseis and now trains Imaginators who belong to the Sorcerer Battle Class. He is available with Crash (who is a Brawler Sensei of the Life element) in the Crash Edition Starter Pack for PlayStation 3 and PlayStation 4 (though they're both playable on other consoles), alongside the original components of the regular starter pack: King Pen, Golden Queen, and a Fire Creation Crystal. He and Crash are also available in the Thumpin' Wumpa Islands Adventure Pack for those who want to buy them separately.

A wormhole has opened in Skylands and the great Aku Aku appears! He comes to announce the once-in-two-decades Synchronization Celebration -- it is the time when all the worlds align perfectly. All the inhabitants of Wumpa Island are having a huge party in the Wumpa Islands and want to invite the Skylanders. But Dr. Neo Cortex has created a sinister machine to harness this incredible energy for his own evil purposes, only to watch it go completely haywire. Now Dr. Neo Cortex must partner with Crash Bandicoot to stop the machine before Wumpa Islands are completely shaken apart!

In the Thumpin' Wumpa Islands Adventure Pack, Dr. Neo Cortex had planned an evil scheme for 20 years to create an army of unstoppable minions using the rhythmic energies of the Synchronization Celebration that took place on the Island. However his Cortex Matrix Chamber was hijacked by his minion Fake Crash, causing an explosion that sent Cortex rocketing towards the island beach. He is then forced to partner with his nemesis, Crash Bandicoot, and the Skylanders to stop Fake Crash from destroying Wumpa Island with bad rhythms. After Fake Crash's defeat, Cortex was dismayed that his Cortex Matrix Chamber was turned into a docile music box by Mags and was last seen glaring angrily at Crash.

As his original creator, Cortex holds a deep hatred for Crash Bandicoot. Whenever Cortex tries to take over the world, Crash always steps in and saves the day, which deeply irritates Cortex.

However, now that they're Skylanders, the scientist and the marsupial are now on much friendlier terms with one another, even though they are often annoyed at each other's personal antics.

Uka Uka is Cortex's boss and the brother to Aku Aku. Uka Uka is always angry at Cortex and his constant failure to take over the world. 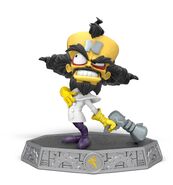