Double Trouble is a tiki-masked sorcerer Skylander in the Skylanders series. He is of the Magic element. He has a purple counterpart called Royal Double Trouble, who is available in the Starter Pack of Skylanders: Battlegrounds.

A loner at heart, Double Trouble discovered the joys of companionship through his clones. Always upbeat, the spirited shaman is a bundle of unearthly Eldritch energy. [1]

Double Trouble once lived all on his lonesome in a tropical Skylands rainforest. Here, he foraged for rare roots and exotic plants for his potions. During one such forage, the solitary sorcerer discovered the Whispering Water Lily, a wondrous plant said to multiply the strength of any spell. Straight away, he tried it out. He greedily gobbled the lily down, and then... Belch! Gurgle! Pop! Three tiny copies of himself appeared from nowehere. It seemed that he had silightly misunderstood the lily's powers. Luckily, his clones were charming, clever and cute - and he could certainly do with companionship. There was just one drawback: the clones had an annoying tendency to explode on contact. Still, they turned out to be exactly what Master Eon was looking for, so the hallowed one wasted no time in making Double Trouble a Skylander.[2]

Double Trouble was the one who discovered Zoo Lou and saw his potential after the furry shaman drove off the trolls that had invaded his homeland.

Double Trouble was on board Flynn's balloon with Hugo and Warrior Librarian, Squirmgrub, when they were on their way to the Storm Titan Games to inform Master Eon of the location of the next segment to the Mask of Power. However Lightning Rod's stray hammer crashed into the air balloon, causing it to spiral out of control. The passengers were saved from the crash by Drobot, and Hugo afterwards informed Eon of the next fragment to the Mask of Power.

Despite not being able to communicate with the other characters, Master Eon and Pop Fizz are both able to understand what Double Trouble is saying. The shaman was sent to Tempest Towers with Lightning Rod, Drobot, Pop Fizz, Cali, and Flynn to retrieve the Air fragment that was believed to be a Land Whale. Along the way, Double Trouble's clone managed to sneak on board Kaos's Drow zeppelin after the evil Portal Master captured Cali for the path to Tempest Towers. It is revealed the shaman can see through the eyes of his doubles. Once the Skylanders managed to get to Tempest Towers before Kaos, Double Trouble and Flynn were left outside the city wall to keep an eye out for Kaos.

While Kaos attempted to enter the Cyclops city, Double Trouble and Flynn snuck on aboard the Drow zeppelin to rescue Cali just before the evil Portal Master and his army of Drow engaged in an all-out battle with the Cyclops Queen and her army. With Flynn's help, Double Trouble and Cali took control over Kaos's Drow zeppelin to use as a way to get off the island, while Kaos and his Drow forces pursued the escaped Land Whale on foot. It was soon revealed that the Air segment wasn't the Land Whale, but one of the city's towers as it is made from the heaviest stone in Skylands, the opposite of the Air element. The Skylanders were able to carry the tower back to the Eternal Archive thanks to a supersized Lightning Rod, and celebrated their victory. However they were unaware that they was a traitor in their mist, revealing the locations of the fragment to the Mask of Power to Kaos: Squirmgrub.

There are three things that would have been running through Double Trouble's mind during his frozen state: Magic, Magic, and Magic! That's right! This masked, magical guru has spent so long thinking about the subject that he's hardly ever made a friend in his life. Aww![3]

As a result from eating the Whispering Water Lily, the bewitched bloom gave Double Trouble the power to create exploding clones of himself, which seek out foes before they explode. Double Trouble's primary attack is shooting beams of energy from his eldritch staff. Double Trouble can even summon magical spheres to rain down which explode like bombs. His Soul Gem allows him to fly over water. In Lightning Rod Faces the Cyclops Queen, it was shown that he could also use the beams from his eldritch staff to levitate objects, as he was able to raise an anchor with it. Double Trouble could see through the eyes of his clones, and even delay his double's explosions for a while, allowing him to use them as helpers.

Gain a 20% Damage bonus while in the Radiant Isles. The scroll for this upgrade can be found in Galecrack Castle.

Double Trouble in his trailer

Double Trouble in his elemental background 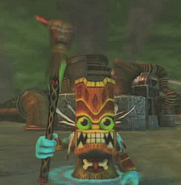 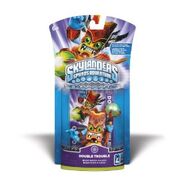 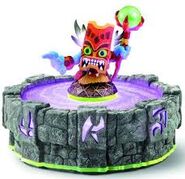 Double Trouble in toy form on the Portal of Power.

Before Staff is upgraded

After Staff is upgraded 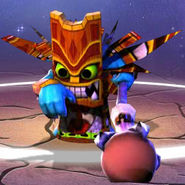 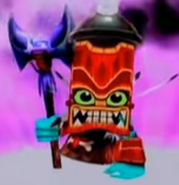 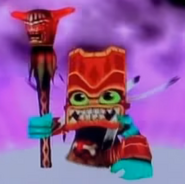 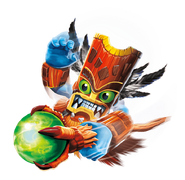 Double Trouble Transparent Render
Add a photo to this gallery 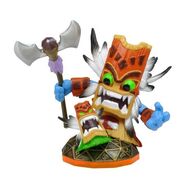 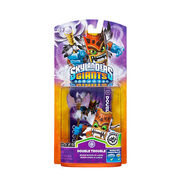 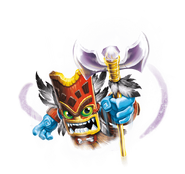 Double Trouble Transparent Render
Add a photo to this gallery

Retrieved from "https://skylanders.fandom.com/wiki/Double_Trouble?oldid=112182"
Community content is available under CC-BY-SA unless otherwise noted.