“Look Out Below!”
—Dive-Clops' official catchphrase

Dive-Clops is an eyeball in an atmospheric diving suit. He is one of the Water SuperChargers in Skylanders: SuperChargers. Apart from being Eye-Brawl's twin brother, his signature vehicle is the Dive Bomber.

Dive-Clops was originally going to be a fish in a diving helmet. His weapon were either his signature Waterpedo gun or a large golden hook. However, due to problems with getting the fish in the helmet in toy form, Dive-Clops ended up being an eyeball instead.[1] 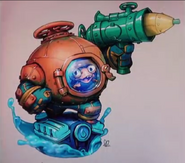 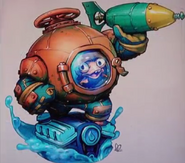 Dive-Clops is very observant, similar to his twin brother, Eye-Brawl. He also has great knowledge of aquatic mechanics and the oceans of Skylands.

Believe it or not, Dive-Clops is actually the twin brother of Eye-Brawl. When he was young, his bat-wings were blasted off by pirates while flying over the Swirling Sea, causing him to plunge into the abyss below. After rolling on the bottom for several days, he was discovered by an underwater civilization of Jelly Dwarves. They were instantly fascinated by the bizarre looking eyeball and took him back to their Corral Castle, where they built him a magnificent dive suit that would allow him explore the depths of the sea. But everything changed when Dive-Clops decided to venture to the mysterious Whirlpool of Destiny deep within the ocean. As he got closer, he suddenly felt pulled by its immense power, and reemerged to discover that thousands of years had passed! Now with his destiny before him as a member of the Skylanders, Dive-Clops lets the minions of Kaos know that there are many dangers of the deep!

Dive-Clops is the twin brother of Eye-Brawl. As a born flyer growing up, he and his brother were inseparable. But while flying solo one day, Dive-Clops strayed too close to a pirate ship and had his wings blasted off by their cannon. Without his wings, Dive-Clops dropped into the ocean like a stone. For days, he rolled along the ocean floor that he believed he would roll on forever. Until he was found by a race of underwater creatures called the Jelly Dwarves. They never saw anything like Dive-Clops before (with the feeling being mutual for Dive-Clops), so they invited him back to their coral castle where they built a dive suit for him to explore the ocean depths. His destiny changed forever when Dive-Clops decided to venture too close to the Whirlpool of Destiny, which pulled him in with its powerful current. He had no idea how long he whirled and twirled, but eventually the whirlpool spat him out. To his surprise, Dive-Clops discovered that a thousand years had passed. Lost and alone, he encountered Master Eon, who offered Dive-Clops to become a Skylander, just like his brother. Now as a SuperCharger, and with his Dive-Bomber, there is no undersea undertaking he can't handle.

When strange rifts started appearing around Skylands, non-Skylanders Dive-Clops and Fiesta were called by their friends, Spitfire and Stormblade, to help investigate the cause. They arrived in their vehicles to aid Spitfire and Stormblade soon after they both saved Skylanders, Stealth Elf, Terrafin, Gill Grunt and Jet-Vac, from a rift in Know-It-All Island. The Skylanders then allowed the SuperChargers to aid them after their only means of transportation, the Dread-Yacht, was consumed by the rift.

While trekking through Skylands, the Skylanders and SuperChargers figured out the Stone Head's riddle and came to the Whirlpool of Destiny where the Rift Engines were hidden in an undersea city. Dive-Clops and Gill Grunt took the Dive Bomber and sank into the deep depths of the whirlpool where they began their search for the Engines. With the help of the Dive Bomber's sonar ability, they were able to find a large chest that contained the Rift Engines, but became threatened by aggressive Hydra Hatchlings. During the battle, Gill Grunt was chosen by a Water-elemental Rift Engine and transformed into his SuperCharged form, using the Hydra Hatchlings to haul the chest back to the surface where their companions were waiting for them. With the power of the Rift Engines, Stealth Elf, Jet-Vac, Gill Grunt and Terrafin transformed into SuperChargers and easily overwhelmed the attacking Drow forces.

Now having enough Rift Engines to stop Kaos and his latest plan, the Skylanders invited Dive-Clops and the SuperChargers to become Skylanders, to which they eagerly accepted.

When water levels began rising across Skylands, Dive-Clops was summoned to find the cause of the disturbance. Deep in the depths of the ocean floor, he discovered an underwater water factory pumping out huge amounts of water. Dive-Clops was then suddenly brought aboard a patrolling submarine, became overpowered by a pirate crew led by Blubberbeard. The former pirate captain had grown tired of losing as a pirate, so he formed a new plan and recruited his fellow walruses, Brawl & Chain and Brawlrus, to join him. Blubberbeard planned on flooding the Skylands with his underwater water factory to easily rule over it, and Dive-Clop would witness the the villain's plan unfold.

Dive-Clops' twin brother, Eye-Brawl soon came to rescue his little brother, but Blubberbeard took notice of the Giant's approaching submarine and fired a torpedo towards it, blowing it to smithereens. Assuming Dive-Clops's rescuer to be dead, Blubberbeard had Dive-Clops imprisoned, unaware that Eye-Brawl survived. When both brothers reunited, they devised a plan to trick Blubberbeard and his crew by switching bodies. While Eye-Brawl used Dive-Clops' suit to draw the pirates' attention in the bridge, Dive-Clops, piloting Eye-Brawl's headless body, snuck his way to the controls and rammed the submarine into the underwater water factory, destroying it. Blubberbeard grew eager for revenge for his plan being foiled, but begrudgingly chose to save his crew from drowning in the damaged submarine rather than going after Dive-Clops and Eye-Brawl. After escaping safely, the walrus pirate was about to make his getaway along with his crew and start a new evil plan, only to be quickly apprehended by Dive-Clops, Eye-Brawl, and several of the aerial Skylanders including Spyro.

In Skylanders: SuperChargers Racing, Dive-Clops is one of the best combat characters in the game. He boasts both excellent Firepower and maximum Armour, making him capable of both taking and dealing damage. His Top Speed is good, but his Acceleration and Handling let him down.

As a SuperCharger, he has access to the vehicle mods. When paired with his Dive Bomber, his battle stats are improved tremendously. His Armour goes up immensely and his Firepower - while only receiving a modest boost - is helped by the Dive Bomber's naturally high stat. His Top Speed also receives a good boost while his Acceleration and Handling receive only minor boosts.

As an AI racer, he uses the Shield Striker for Land races, the Buzz Wing for Sky races, and his Dive Bomber with SuperCharged mods for Sea races.