Gill Grunt now possesses a trident which he can jab his opponents with, and unleash powerful blasts of Lightning with it. Gill Grunt can now use his jet pack to create waves to wash away foes. His Soul Gem allows him to use his trident to summon a storm which rains lightning down on enemies.

In Skylanders: SuperChargers Racing, Deep Dive Gill Grunt is almost completely balanced in his stats. All of them are good, with his Handling and Firepower being marginally better than his other stats.

As a SuperCharger, he has access to the vehicle mods. When paired with his Reef Ripper, he gains a great boost to his Handling and moderate boosts to his Acceleration and Firepower. Small boosts are added to the Top Speed and Armour.

As an AI racer, he uses the Gold Rusher with the Gearwork Kit mods for Land races, the Buzz Wing for Sky races, and his Reef Ripper with the SuperCharged mods for Sea races.

Learn how to ride on massive waves and damage enemies in you way!
Channel the power of the storms of the sea and electrify your attacks! 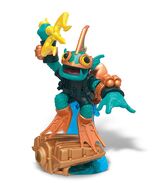 Deep Dive Gill Grunt along with his concept designs

Retrieved from "https://skylanders.fandom.com/wiki/Deep_Dive_Gill_Grunt?oldid=114991"
Community content is available under CC-BY-SA unless otherwise noted.