Here, the Skylanders have the ability to switch between the Ghost World and the Real World using Spectral Shifting Platforms to get through obstacles. On the Wii version, once this level has been completed, Batterson's Pies will appear in other levels.

Upon arriving, the Skylander meet with a Molekin chef named Batterson who told the Skylander of the previous events of the Undead having stopped eating the brains of the living and started eating the Molekin's pies. However, they recently stopped buying pies and began causing an uprising. He then showed the Skylander the differences between the real world and Ghost World using the Spectral Shifting Platforms. Afterwards, Batterson explained that the bank will take away his business if he doesn't get any sales soon, and tasked the Skylanders to find out why the Undead had stopped buying pies.

When they entered the Crypt, the Skylander was greeted by a giant eyeball monster named Occulous, who is surprised to see a non-ghost in the Ghost World. Reaching the Haunted Village where the Undead reside, the Skylander encountered a ghost named Gallant, who told the Skylander about Occulous's true nature. The eyeball monster came to the village one day and outlawed all pies, proceeding to force the Undead to do bad things to the Living against their will. The Skylander then agreed to help rid the Haunted Village of Occulous' rule and navigated through the monster's maze to reach him.

With the help of Gallant, the Skylanders defeated Occulous, allowing the Undead to finally eat pies again and saving Batterson's business.

A PvP arena that is unlocked when the figure is first placed on the Portal of Power.

Wighthaunt is a level exclusive to the 3DS version of Spyro's Adventure.

The adventure pack comes with three magic items. To use an item, simply place it on the Portal of Power in the same way you would a Skylander. Only one Magic Item can be active at the same time.

When used in the Ruins, the crypt grants access to the Darklight Crypt chapter.
When used during a chapter, the crypt unleashes a swarm of ghosts at everything on the screen. It deals 999 damage to all enemies and can only be used once per chapter.

The elixir restores health to all Skylanders currently on the portal for approximately 25 seconds. The amount of healing given is 450, in bursts of 30 every few seconds. It can be removed to save part of its healing for later during the chapter, but once it is out of energy it cannot be used again until the chapter is left or completed.

(Described as "Time Twister" on the packaging.) This hourglass slows time for everything but the Skylander for 30 seconds. It can be removed to save part of its power for later during the chapter, but once it is out of energy it cannot be used again until the chapter is left or completed. 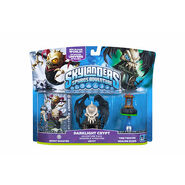 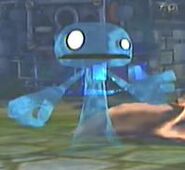 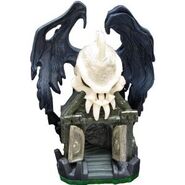 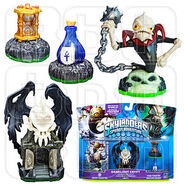 Retrieved from "https://skylanders.fandom.com/wiki/Darklight_Crypt?oldid=126241"
Community content is available under CC-BY-SA unless otherwise noted.