Dark Spyro is the dark counterpart of Spyro who comes with the Nintendo 3DS version of Skylanders: Spyro's Adventure and in a single pack in certain countries. He is currently the only variant to have a different catchphrase and moveset (3DS only) than his normal counterpart. He has a Series 3 Mega Ram counterpart.

In Skylanders: Ring of Heroes, Dark Spyro has been renamed as Shadow Spyro and is part of the Dark element.

Spyro had some sensational skills. Unlike the other Skylanders, he could harness the power of every element, but still preferred his original favorite - Fire. But there was a sinister side to Spyro's ability. Master Eon observed this first-hand when The Darkness attempted to corrupt the Core of Light. Spyro began to shudder and shake. His purple skin seemed to flush and flare as dark magic flowed through him like lightning. Only Master Eon's speedily cast spells saved Spyro from a foul fate. With time, and Eon's tutelage, Spyro had learned to master this dark magic know-how. And when he harnessed energy, he transformed into Dark Spyro! However, only Spyro's brave heart and careful control prevented him from being consumed by darkness.[2]

Although Dark Spyro has the exact same abilities as Spyro in the console version of Skylanders: Spyro's Adventure (and thus the same as Legendary Spyro, with only a color swap), his changes are quite dramatic in the Nintendo 3DS versions of the game and later handheld installments.

In the Nintendo 3DS versions, Spyro and Legendary Spyro are quite masterful shooting just regular fireballs and using their Horn Charge. However, Dark Spyro is more adept at physical slashes and using magical thunder. At first he can use only a three-hit slashing combo, and of course dash and jump, and is also one of the characters able to glide. As he levels up, he learns to shoot thunder balls (which he can later run over to get power and speed boosts) and shoot powerful rays of lightning energy. 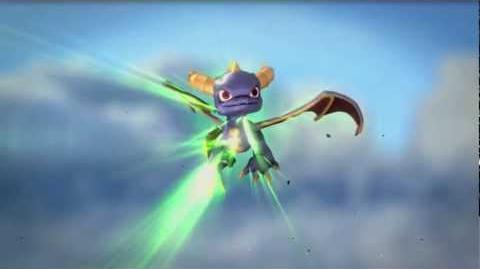 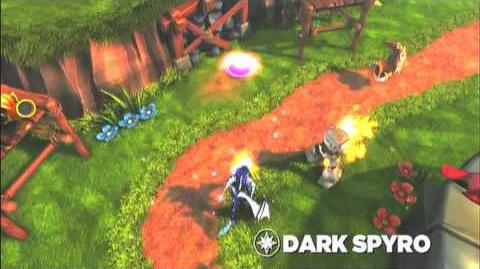