Skylanders Wiki
Register
Don't have an account?
Sign In
Advertisement
in: Skylanders, Alt Deco Skylanders, Skylanders with houses,
and 8 more

Not to be confused with Skylanders of the Dark element.

The Dark Edition Skylanders are a group of Skylanders with the ability to transform into darker versions of themselves using the power of the Petrified Darkness within them. They commonly take on a black and silver color scheme, though they sometimes retain some of their original colors, such as the Traptanium weapons of Wildfire and Snap Shot, or Blast Zone's flames.

Spyro had some sensational skills. Unlike the other Skylanders, he could harness the power of every element, but still preferred his original favorite - Fire. But there was a sinister side to Spyro's ability. Master Eon observed this first-hand when The Darkness attempted to corrupt the Core of Light. Spyro began to shudder and shake. His purple skin seemed to flush and flare as dark magic flowed through him like lightning. Only Master Eon's speedily cast spells saved Spyro from a foul fate.

With time, and Eon's tutelage, Spyro had learned to master this dark magic know-how. And when he harnessed energy, he transformed into Dark Spyro! However, only Spyro's brave heart and careful control prevented him from being consumed by darkness.

While on a special mission, a team of Skylanders discovered a secret lair where Kaos was experimenting with a new discovery – Petrified Darkness – which he initially intended to use to stage a coup against Skylands. In their fight to stop Kaos, the lair exploded, releasing a cloud of pure Darkness. The Skylanders knew they couldn’t let it escape, so they absorbed this energy, transforming them into dark versions of themselves. Fortunately, Spyro learned to tame that darkness within him long ago. So with his help, these Skylanders now have also learned to control it – combining its power with their own to fight Kaos and the forces of evil.

Later, from his top secret lair, Kaos had engineered a dangerous material known as Dark Traptanium – which he intended to use to capture the Skylanders once and for all! Caught off guard, several Skylanders fell into his trap and were imprisoned within the crystal walls. But the Trap Masters arrived just in time and shattered the dark traps with their weapons made from pure Traptanium! Though they were free, they had absorbed enough of the dark energy within, transforming them into dark versions of themselves! Fortunately, they have learned to control it – combining the dark power with their own to fight Kaos and the forces of evil. 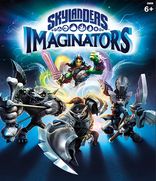 Sir Hoodington and the Dark Edition Senseis in Imaginators