Cynder Confronts the Weather Wizard is the fifth installment in the Mask of Power series. This book features the Undead Skylander, Cynder, as the title character, who will be joined by Hex and Zook.

Storm clouds are gathering - which wouldn't be unusual, if it wasn't for the fact that this is meant to be the Cloudless Desert! As weird weather reports flood in from all over Skylands, Cynder heads off on a mission to the Isle of the Undead to find out what's going on. Whatever it is, it definitely looks like rain!

The secrets of the Mask of Power unfold further in this fifth novel in the story series from the pen of Onk Beakman. Based on the characters from the smash hit Skylanders video games.

The story begins with Cynder and Zook enjoying the sunrays of the Cloudless Desert, though Cynder was anxious on searching for the remaining fragments to the Mask of Power. Soon Hex arrived through a portal and informed her two fellow Skylanders that Master Eon wanted to see them. Suddenly a freak rainstorm brewed, causing the sand dunes of the desert to become quicksand that threatened to pull the beachgoers into the sands. The Skylanders sprang into action and saved the surrounding inhabitants, though Hex received some negative feedback regardless.

Returning to the Eternal Archives after saving the Mabu, the Skylanders discovered that similar strange weather was happening in several other parts of Skylands, at the same time that the Book of Power revealed that the next fragment of the Mask of Power was in the Isle of the Dead, which sent a call for help on the same day. Hex, Cynder and Zook immediately set off to the Isle, fighting their way through the forests to reach the town with the help of the ghost Flunky and the Bark Demon called Dogwood. There, they met the Night Mayor, Morbo the Macabre, who sent the call for help. Though the way the islands' inhabitants talked confused the trio at first, they soon found the source of the problem as the dark skies cleared at the witching hour.

A head-shaped cloud appeared in the sky, calling itself Hurrikazam. At his order, the inhabitants of the island were forced to give it a batch of Batterson's pies, and many were taken along with the food in the cloud's small twisters. The trio of Skylanders attempted to intervene and save the Undead folk, but Hurrikazam neutralized all of their attempts and demanded to be given the same tribute the following day, or he'd leave the skies of the Isle of the Undead sunny forever. Though Zook thought it was a good thing, Hex was quick to point out that Undead crops need bad weather instead of good weather, and later they found out that those who were captured were brought back to life and forced to see and smell plants full of life, which they detested. The fate of the captives seemed to catch Hex's interest, but they had no time to discuss it and quickly made a plan to reach the fortress where the true Hurrikazam controlled the weather, the Cloud Citadel.

With the help of Gargantulas, the three Skylanders managed to sneak into the Cloud Citadel when more Undead townsfolk were kidnapped. There, they discovered the Undead Energy Extractor, a giant metal cloud device that absorbed the Undead energy of creatures, making them alive or less scary than they used to be, controlled by the real Hurrikazam. Springing into battle, the Skylanders defeated a group of Drow Lance Masters led by Brock who were guarding the captives, but when confronting the Weather Wizard, he was actually relieved to see their arrival. Explaining that he was being forced to use the Extractor, he begged them to help him escape, but soon they found out the person behind all of it - as usual, Kaos, leading another group of spear Drow and bringing Glumshanks along.

Despite wanting their help, Hurrikazam stopped the Skylanders from attempting to attack Kaos, who explained that the fake wizard needed to help carry out his plans at the cost of the Amazing, Fantastic, Incredible, Surprising, Unfathomable All-Coloured Rose, a rare plant which the evil Portal Master threatened to destroy should Hurrizakam disobey him. And, when questioned about said plans, Kaos revealed that he planned to use the Undead energy to destroy every other Element by turning all of Skylands into Undead creatures. But as the Skylanders seemed helpless to stop him, Hurrikazam came to realize that the All-Coloured Rose wasn't worth dooming all of Skylands, and refused to continue even after the Rose was cut in half. Kaos attempted to use the controls himself - he had practiced with the weather controls while the powerless Weather Wizard tended to his plants. The Skylanders and Kaos' minions engaged in battle after Brock accidentally set them free, and Hurrikazam acts quickly by using his machines to separate them all from the army of Drow before Cynder disabled the weather control panel with her lightning. Things seemed to be going for a confrontation between our heroes, Kaos and Glumshanks, but before Cynder could strike them down, she and Zook were stopped by a familiar wall of bones - Hex suddenly changed sides and protected Kaos from certain defeat.

Powerless to reach Hex as her magic was stronger near the Undead energy, Zook and Cynder could only watch and attempt to reason with her as the sorceress, despite stating that she didn't agree with him, needed Kaos' cooperation to have her own Undead energy removed and turn back into a living creature. Making sure that the Extractor was still operational with Hurrikazam before also making sure he wouldn't interfere, Hex entered it and hurried Kaos to turn it back on. At first, it seemed like the evil Portal Master would fulfill his plan easily, but Hex's Undead energy proved to be so vast that it overloaded the Extractor and destroyed it, freeing the energy of all the captives and destroying the bone walls. Cynder and Zook found out that Hex was tricking Kaos all along and, having a look at her old appearance for a brief moment, revealed she had embraced her Undead self long ago. But while the inhabitants of the Isle of the Undead returned to normal and attacked the Drow army, Hurrikazam warned Cynder of Kaos and Glumshanks fleeing to another part of the Citadel and she quickly followed them. In the Weather Wizard's garden, the Dragoness noticed they were looking for a seed as she was attacked by enchanted flowerpots from Kaos, and in an attempt to stop them she tricked them into going near a big tree, which soon revealed itself to be Dogwood turning back into a Bark Demon and quickly caught both of them. Noticing their defeat as the other Skylanders reached them, Kaos and Glumshanks fled using a portal.

After returning to the Isle of the Dead with Brock, Hurrikazam, and the captives, the Skylanders were congratulated by Morbo. Brock and Hurrikazam apologized for their actions and the Night Mayor offered Hex a place in the Island where she wouldn't be feared, but she refused saying her place was with the Skylanders. Brock was also offered a trip to Rumbletown by Hurrizakam where he could enjoy fighting without working for evil, and the Weather Wizard also gave Cynder the seed that the evil Portal Master was looking for - the only seed of the All-Coloured Rose, the Undead segment of the Mask of Power. However, when preparing to leave, Hex noticed she couldn't contact Master Eon by telepathy to send a portal. With Hurrikazam's help, the Skylanders returned to the Eternal Archives where Spyro was expecting them: to reveal that Squirmgrub had disappeared and kidnapped Master Eon.

The story continues in Stump Smash Crosses the Bone Dragon...

Cynder and Zook enjoying the sun rays of the Cloudless Desert. 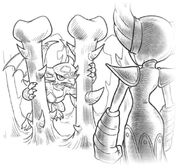 Cynder attempting to reason with Hex while imprisoned in her Bone Wall.