Crusher is an Earth Skylander and one of the eight Giants in Skylanders: Giants.

Single-minded and completely unstoppable, Crusher crashes through any situation with the subtlety of a three-ton hammer. He's also incredibly thick-skinned - probably because his skin's made of stone.[2]

Crusher knew from the moment he put on his father's mining helmet that his true passion in life was crushing rocks. He was fascinated with rock-lore and traveled all throughout Skylands in search of rare minerals to pulverize with his powerful hand-crafted rock hammer, which is also named Crusher. But along his travels, he discovered that the evil Arkeyan King was also searching for rocks-to melt down into weapons of war. Crusher's fury built up like an avalanche. After all, crushing was his job! So he put aside his life's passion and decided to use his hammer for a greater purpose- crushing Arkeyan Robots.

The big Stone Golem, Crusher is fascinated by rocks. Inspired by his father, who was a miner, Crusher would travel across Skylands in search of rare and interesting stones and minerals. Then, when he found a particularly fascinating specimen, he would take great delight in smashing it to smithereens! You see Crusher, as his name suggests, loves to crush things. He especially likes to crush rocks. Big rocks, small rocks, shiny rocks, pointy rocks. Basically, if it starts with 'R' and ends with 'OCKS', it had better watch out when Crusher is around.

Armed with his huge hammer, which he also calls Crusher (his imagination isn't exactly his strong point), this Giant spent many happy years wandering around and smashing stuff to bits. Until, that is, he discovered that the Arkeyan King was pinching all the rocks for his own evil ends. That day Crusher discovered there was something even more fun to do than smashing rocks. Smashing Arkeyans![3]

When Malefor was on his way to attack the Skylanders Academy, Crusher, the Giants and the other Skylanders were summoned to stop the evil dragon. The Giants managed to grab hold of the Malefor's tail to hold him down, but were caught off guard when the mechanical tail was also made as a weapon. In the end, all Skylanders, including the Giants, were defeated in a single blow by Malefor's tail swipe, allowing the evil Undead Dragon King to absorb their powers to make himself more stronger.

Crusher attacks with his large, menacing hammer (also named Crusher) and his secondary attack, shooting eye beams that turn enemies to stone. He can also self-destruct to scatter his rocky parts, but has the ability to reform. In Skylanders: Battlecast, he can also change his composition to endure more attacks or raise his attack. His Special Ability is Golem's Strength, increasing his power, and his signature Gear is his father's hammer, aptly titled My Father's Hammer, which corresponds to his Hammer Daddy console upgrade and doubles his damage. 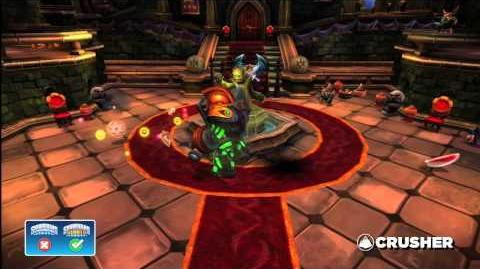 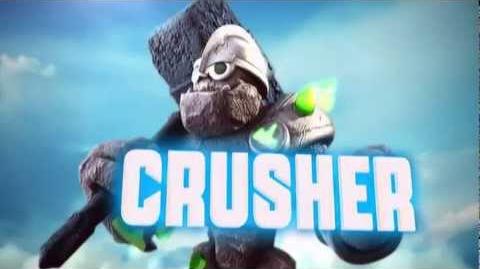