Creation Crystals are special figures introduced in Skylanders: Imaginators; magical vials with an Imaginite crystal inside. They allow players to create and transport their Imaginators to consoles at anytime and anywhere. Creation Crystals are elementally aligned and can be edited at any point, but Portal Masters can create only one character per Creation Crystal. Battle Class, levels and upgrades are meant to be permanent, as the Crystals cannot be reset in Imaginators. 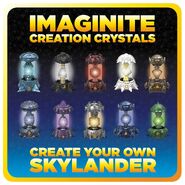