Crash Bandicoot is a genetically-modified eastern barred bandicoot created by his arch-nemesis, Dr. Neo Cortex, and is the titular character and protagonist of the Crash Bandicoot series. Throughout the series, he is commonly seen with his father figure and mentor, Aku Aku, the series' deuteragonist, his sister Coco and brother Crunch, Crash and Coco's pets Polar and Pura, and on rare occasions, his equally goofy doppelganger Fake Crash.

In Skylanders: Imaginators, Crash is one of the Life Senseis whose job is to train Imaginators of the Brawler Battle Class. He is available with Neo Cortex (who is a Sorcerer Sensei of the Tech Element) in the Crash Edition Starter Pack for PlayStation 3 and PlayStation 4 (though they're both playable on other consoles) alongside the original components of the regular starter pack: King Pen, the Golden Queen, and a Fire Creation Crystal. He and Cortex are also available in the Thumpin' Wumpa Islands Adventure Pack for those who want to buy them separately.

Crash is reckless and a little goofy, but heroic nonetheless. He appears to be clumsy even as a master of his brawling abilities, being able to lose time with his Sky-Chi should he entangle himself with the yo-yo.

A wormhole has opened in Skylands and the great Aku Aku appears! He has come to announce the once-in-two-decades Synchronization Celebration--a time when all of the worlds align perfectly. All the inhabitants of Wumpa Island are having a party and they want to invite the Skylanders. But with Kaos on a quest to take over Skylands using his army of Doomlanders, the Skylanders must focus on stopping his evil plans. Never one to shy away from danger, the legendary marsupial Crash Bandicoot leaps through the wormhole to join the Skylanders in the ultimate battle against Kaos!

In the Thumpin' Wumpa Islands, Crash Bandicoot was celebrating the Synchronization Celebration with Aku Aku when Dr. Neo Cortex's latest evil scheme went haywire. Meanwhile, Spyro and Mags were on their way to Wumpa Island themselves, and Dr. Neo Cortex was praising his latest invention, the Cortex Matrix Chamber. However, one of his minions, Fake Crash, allowed his curiosity get him as he hijacked the machine, sending the scientist rocketing towards the start of the main island. Though reluctant to trust Cortex, Crash, Aku Aku, Spyro, Mags, and the Skylanders team up with the villain to get rid of the Bad Vibes. At the end of the level, Crash was seen pointing his pointer fingers at Dr. Cortex (possibly his way of complimenting him), but backed away when he saw Cortex getting angry.

Crash met Aku Aku early in his first adventure, and the witch doctor mask has helped the bandicoot ever since. He is often seen as a father figure or guardian to Crash.

Crash Bandicoot was one of Cortex's creations that went wrong. Ever since Crash escaped, Cortex has wanted nothing more than to destroy the bandicoot once and for all. Throughout the Crash Bandicoot series, the relationship between Crash and Cortex has shown that the mad scientist holds deep hatred towards the bandicoot for ruining his plans for world domination. This can be seen again at the end of the Thumpin' Wumpa Islands.

While the origin of their friendship in this universe is unknown, Aku Aku refers to Spyro as an old friend of Crash Bandicoot.

Crash Bandicoot retains several of his old abilities from the Crash Bandicoot series as a Skylander. He can perform a punch combo before unleashing his classic spin attack, and even perform his classic slide attack. These can be further upgraded to extend the duration and damage of the spin attack as well as adding an upward kick to the end of the slide attack that Crash can combo out of. He is also capable of performing his classic body slam attack to stun enemies briefly and throw out explosive crates that he can then direct into enemies.

A key aspect of Crash Bandicoot's gameplay is his low health and armor, which makes him one of the most frail Skylanders to date. Crash compensates for this by having the highest attack of all Sensei's, as well as the ability to regenerate with brief invincibility multiple times before needing to rest. Crash also has a chance to generate extra lives during combat when he throws out a crate. With his Soul Gem, he also has a chance throw out a special crate that releases his Fruit Bazooka, which he will then use to attack enemies from above. For his Sky-Chi, he uses his yo-yo to pull enemies towards him to attack, though he also entangles himself with it once the meter runs out.

Twirl towards freedom and victory with more powerful and useful spin attacks.
Litter the battlefield with crates and pack them each with more of a punch. 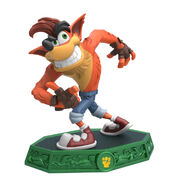 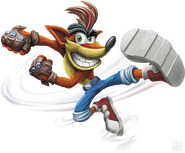