Jungle Ruins (Outside)
Magic Temple (Inside)

The Cradle of Creation is the first chapter of Skylanders: Imaginators. At first, it appears to be an ancient temple hidden in a jungle, but closer inspection reveals a magical area hidden inside a mountain created by the Ancients. Spyro is the Storyteller of this level. 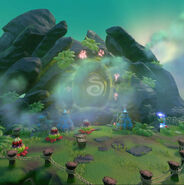 A closer view of the Cradle of Creation's mountain.

Cradle of Creation environmental and prop work by Jamie Burton

Retrieved from "https://skylanders.fandom.com/wiki/Cradle_of_Creation?oldid=120549"
Community content is available under CC-BY-SA unless otherwise noted.