Count Moneybone is a skeleton overlord who is the main antagonist in the Nintendo 3DS version of Skylanders: Swap Force. He is the lord of The Underworld and is flanked by an army of undead clockwork creatures.

Count Moneybone's design and mannerisms were based off of actor Clark Gable and cartoon bad guy Skeletor from the Masters of the Universe franchise. n-Space wanted a villain that was scary enough to play the bad guy but charming enough to carry the story. Moneybone is very vain bad guy and his purple and gold color scheme helps reflects that. The idea was he had the best of everything.[2] 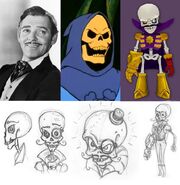 Full of himself and overconfident about his intelligence, Count Moneybone uses his creations and powers to take and do what he wants with no regard for others. He initially used the guise of a kind, trustworthy monarch to deceive his entire town in order to carry out his plans until the Skylanders revealed his true colors: a cruel, power hungry monster. He is also said to be vengeful, and is willing to deceive his own town to carry out his plans. For reasons unknown, he wishes for all of Skylands to be Undead like him.

In Skylanders: SuperChargers, he is portrayed to be very loyal to Kaos and shows no signs of his boastful personality unless confronting the Skylander, even attempting to be optimistic about his and Kaos' "total victory" despite a recent failure. After Kaos began working with the Skylanders, Moneybone considers his former master as a traitor and once again sought to fulfill his own plans to rule Skylands.

Though much of his abilities lie in being knowledgeable about machinery, he can teleport objects with the snap of a finger, and turn others Undead using his staff. In SuperChargers, he was granted abilities to force others into Perspective Gates and seal or open them at will.

Oddly, Moneybone appears to be convinced about his fist fighting abilities despite being frail, and in Battlecast the character with the lowest health if his power suit is deactivated.

In Skylanders: Battlecast, Count Moneybone can fire Plasma Blasts from his gauntlets and summon a Vampire Battery to power-up and enhance his mechanical armor Gear.

Normally, Count Moneybone has only 10 HP and 10 power at a base level. However, he is protected with a Power Armor Mark 5 Gear which boosts his power and health. This gear is unique in that it cannot be destroyed by normal means and can have any standard gear equipped at the same time. To destroy this gear, the Vampire Battery Relic must be summoned then destroyed first. Once it is broken, Moneybone will be down to his weakest stats.

In the story's introduction, Count Moneybone launched an attack on Boom Town, stealing Flynn's golden statue for himself and turning Cali into a zombie to serve as his Undead bride. During the course of the adventure, the Skylander faced Moneybone on a few occasions to stop his evil operations that threatened Skylands. Eventually they reached his underworld villa where he announced his plan to his partygoers of taking over Skylands by draining the life of all the inhabitants using a machine called the Immortal-izer Ray, allowing Moneybone to rule. The Skylanders crashed the party and seemingly cornered Moneybone, revealing to the Undead residents his true colors. However Count Moneybone and the Undead Cali escaped using a flying fortress, while leaving portion of his robotic army to hold back the Skylanders.

Within his clockwork castle, Moneybone was confronted by the Skylanders and battled against them using his latest and strongest of Clockwork Powersuits. When his powersuit was destroyed, the evil count tried to engage the Skylander in hand-to-hand combat, only to be swiftly defeated in a single blow.

Count Moneybone was recruited into Kaos's new army as part of the Portal Master's latest scheme, now possessing a massive airship and an aerial strike team at his disposal. The evil count retrieved a group of dark elite Drow from Kaos' old fortress in the Cloudbreak Islands that were in the process of attacking a Skylanders search group. He proudly announced that the Skylanders were given a taste of Kaos' new world order before he and his airships held back as a rift opened up and began pulling Sharpfin's ship towards it, endangering everyone on board.

Count Moneybone assisted Kaos in his goals to use The Sky Eater on Skylands, holding Master Eon imprisoned within his underworld Rehabilitation Center inside a Traptanium crystal cluster. With help from the Cloudbreather Dragon, the Skylanders were able to trace Eon to the Land of the Undead where Count Moneybone was holding him. The evil count soon fought the Skylanders in his vehicle to make sure that they don't free Master Eon from his prison, but failed. His failure earned him Kaos's wrath, and Count Moneybone was cut off before he can explain further.

Count Moneybone also returns as a raceable villain with his Spirit Dragster vehicle. When bested in his Boss Pursuit at The After Party racetrack, Portal Masters will be able to race as Moneybone in Racing Mode.

After his recent defeat, and Kaos defecting to the Skylanders, Count Moneybone labeled Kaos as a traitor and began to plan his own goal to rule over Skylands once again. He retreated to The Underworld where he took his time building an army of robots that would rampage across Skylands, destroying everything in their path as revenge on those who wronged him. When two Mabu miners came upon one of the robots, it captured them for Moneybone to prevent them from fleeing and informing anyone.

However Fiesta ventured into The Underworld to find and retrieve the missing Mabu. He was instead confronted by Count Moneybone who cornered Fiesta and called him a 'betrayer' for aiding the Skylanders against his previous robot army scheme. The skeletal Skylander managed to defeat his robot army when they charged to attack. However Moneybone had one last trick up his sleeve by activating a secret weapon that allowed the dismantled robots to merge into a single giant monstrosity. As Count Moneybone prepared to have his machine crush Fiesta, the two Mabu and Fiesta's amigos drove the Crypt Crusher into the robot, utterly destroying it. With his plan and his robot army in shambles, Moneybone became trapped inside the head of his own robotic creation by Fiesta and was sent rolling to the depths of the cavern. When he was asked on how deep the cave was, Fiesta stated that the cave could go on "maybe forever" and it would take a long while before anyone would hear from Moneybone again.

When under Kaos's command, Count Moneybone tries his best to stay on the Portal Master's good side and not to displease him. However when Kaos began working with the Skylanders, Moneybone considers Kaos a traitor.

Count Moneybone holds deep resentment towards Fiesta for betraying him and joining the Skylanders.