Keeps The Darkness at bay

The Core of Light is an ancient machine that was created by the Ancients, first appearing in the console versions of Skylanders: Spyro's Adventure. It is powered by all the elements and was constructed using various items from the whole of Skylands. In the game, the Core of Light was located in the hub world known as the Ruins and will be reconstructed one by one as each elemental component and Eternal Elemental Source is restored to the machine.

The Core of Light is a great machine that the benevolent Ancients created to fill the skies of Skylands with light and to keep The Darkness at bay, after the Skylanders of old discovered it in the Ancients' Peak and used it to destroy most of the villain's original form. However, millenia later,  Kaos arrived in Skylands and learned of the Core. Hungry for power, he tried to destroy the machine there and then in order to rule Skylands, but he was defeated by Master Eon and the Skylanders. The evil Portal Master, however, hasn't given up on attempting to destroy the Core of Light.

The Core of Light was moved to the Skylanders Academy during Rift into Overdrive, to protect it after the events of Trap Team as all Skylanders were now stationed at the school. When the Sky Eater's rifts disrupted Portal communication across Skylands, Kaos' forces and Count Moneybone's army attempted to take advantage and destroy the Academy, but the Skylanders regrouped just in time to prevent the attack.

While looking through the writer Pomfrey's research on the Ancients stored in the Spell Punk Library, it was discovered that the great machine wasn't actually completed despite possessing the power to hold back The Darkness, and it required the Eye of the Ancients in order to be completed and unleash a direct attack. However, before the Skylanders could return the final component, great part of it was swallowed by the Sky Eater in a surprise attack, forcing the Skylanders to look for other ways now that Skylands was left without a beacon of light.

A new Core of Light was built in the Sensei Light Realm, using most of the components that remained. It now needed to be fueled by the lasers of power crystals of various colors, which also powers the machinery of its island. At an unknown point, enemies invaded the desert surrounding it and moved the crystals, and its overseers, Lux and Lumiosa, asked for the help of the Skylanders to restore the crystals' positions and keep the Realm from being engulfed in darkness.

The Core of Light protected Skylands from The Darkness for many years, using a brilliant beam that instantly vanquishes the magic-eating entity's manifestation where clearly visible. However, in SuperChargers, Pomfrey's research revealed that the machine's original function was to act as a weapon against The Darkness, and not only as a shield. With the Eye of the Ancients equipped, the Core of Light's true potential would've be revealed had it not been destroyed by Kaos' Sky Eater.

The Core of Light also bestowed its magic upon Skylanders, giving them LightCore powers. When activated, these Skylanders grow brightly in certain spots and can unleash a wave of light that defeats most enemies instantly.

The Twin Spouts of Ocea-Major-Minor 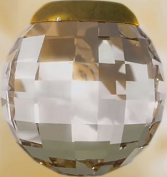 The Green Goo of Primordia

The Skull Mask of the Undead King Mortalannis (back)

The Skull Mask of the Undead King Mortalannis (front)

The Crucible of the Ages

The Eye of the Ancients (never added)

The Core of Light as seen in Skylanders: Imaginators
Add a photo to this gallery

Retrieved from "https://skylanders.fandom.com/wiki/Core_of_Light?oldid=116409"
Community content is available under CC-BY-SA unless otherwise noted.