Cobra Cadabra is a cobra who was one of the Magic core Skylanders that first appeared in Skylanders: Trap Team.

Gameplay designer Nat Loh came up with Cobra Cadabra's name, having designed the Skylander to be deeply rooted in music. Cobra Cadabra has some of the most complex mechanics of any Skylander made but Nat made them optional so that players could opt into the added challenge for added damage. Simply put, if the player pressed the attack button to the beat of the music, they would get a different colored double damage projectile. Nat would also have Cobra's animations bounce to the beat of the music as well as these snake baskets that he is able to summon pulse damage with the beat of the music. This was done by accessing the BPM of each level's music.

Cobra Cadabra's tertiary attack definitely has some Donkey Kong Country vibes (which would come to full realization with Donkey Kong's appearance in Skylanders: SuperChargers) as he flies from basket to basket. A developer anecdote, Cobra Cadabra's Master of Baskets path was originally meant to have 15 baskets at once but after much number crunching, it was deemed unsuitable for the GPU to allow 2 players to have 30 baskets at once.[1]

Cobra Cadabra is a charmer, all right. He's brave too! When he plays an enchanting tune, everyone listens. Like a magician, he never reveals his secrets.[2]

Though Cobra Cadabra was an assistant to The Great Mabuni, a traveling magician that performed all over Skylands, he wanted more than anything to become a magician himself. Unfortunately, the guild of Mysteriously Mad Magic Masters of Mystery, who for centuries taught all of the greatest magicians, would not permit it. And so Mabuni decided to teach the cobra himself, even though it was forbidden. They studied everything together, from vanishing acts to snake charming. But when the guild discovered this, they sent a team of magic rabbit enforcers to punish them both. Although the beastly hares were the most powerful of their kind in Skylands, Cobra Cadabra remained brave. Playing an enchanted tune on his flute, he used what he had learned to cast a spell over the rabbits and lead them away. Upon hearing this, this guild was impressed by such a display of skill, and accepted the snake charmer as a member. Soon after, Cobra Cadabra was made a member of another group – the Skylanders!

Cobra Cadabra can play his magical plungi flute, which launches magic notes that attack his enemies, or cast various spells through songs, one can put enemies under his control. His secondary attack allows him to launch cobra baskets which have cobra allies to attack his enemies. His third attack lets Cobra Cadabra launch himself out of his basket which damages enemies in his way, and land into other cobra baskets. 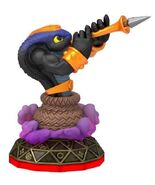 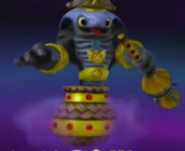 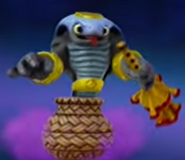 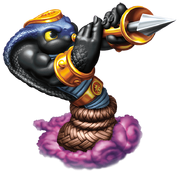