“The Skylanders did...WHAT?! So, you like to go round stealing gears from respectible birds, eh? Well, I've got a present for you, Skylander!”
—Cluck

Cluck, also known as Cap'n Cluck, is a small, villainous bird in the Skylanders series. He was the main antagonist of the Tower of Time Adventure Pack in Skylanders: Swap Force, wearing a large metallic suit created by the Time Trolls. Cluck later made a reappearance in Skylanders: SuperChargers.

Tired of hearing the Tower of Time's constant bellringing, Cluck was given a large suit by the Time Trolls and took over Clock Town, setting up roost in the Clocktower and stopping time from flowing properly. This threatened to trap Skylands in an infinite time loop.

The Skylander arrived in Clock Town and began retrieving the gears to the Tower of Time from Cluck's old nests, which are needed to gain access to the clocktower. However Cluck himself took notice of their actions and sent his troll 'friends' to cause trouble for the Skylanders. When that failed, the bird sent the Skylander to the past, where he engaged them in a short battle in the town square. Afterwards, they managed to drive off Cluck but not before maniacal bird gloated that 'his' tower was impenetrable. The Skylander managed to get past all the obstacles throughout Clock Town and obtained all the gears, allowing them to enter the Tower of Time.

By the time the Skylander had reached Cluck, the Trolls had upgraded his suit, allowing him to create a barrier that was impervious to all attacks unless the nearby Time-Freeze switch was turned on. The Skylander eventually defeated Cluck, destroying his suit, but the small bird promised that they haven't seen the last of him as he flew clumsily out of the Clocktower.

Cluck began his latest scheme under the guise of his popular chicken fast-food business called Cap'n Cluck's King-Sized Chicken. With the Kolossal Kernel in his possession, the small bird planned to supersize his chicken army to take over Skylands. His first successul super soldier for such an invasion was the massive rooster Cockadoodledoom. Upon confronting Cluck in his headquarters, the Skylanders face off against him in his flying machine, the Sky Scrambler. By sending bloated chickens into a machine that would launch them at Cluck, the Skylanders were able to defeat Cluck and claim the Kolossal Kernal as Cluck vowed to have his revenge. Despite this threat, he was soon chased away by rolling bloated chickens.

Cluck can be unlocked as a playable racing character by beating him in a Boss Pursuit in Cluck's Cuckoo Nest.

Cluck using a barrier with his mechanical suit

Cluck peering out of The Tower of Time 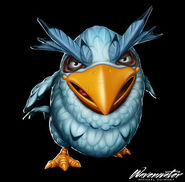 Cluck's Artwork as seen in Skylanders: SuperChargers Racing
Add a photo to this gallery

Retrieved from "https://skylanders.fandom.com/wiki/Cluck?oldid=122453"
Community content is available under CC-BY-SA unless otherwise noted.