Compact weaponry that didn't go with Chopper at first

Chopper's final design
Add a photo to this gallery

Chopper was the only experienced Skylander onboard the Dread-Yacht when Flynn was transporting the Minis to the Skylanders Academy. The young dinosaur noticed a dazed Flynn walking right off the ship and quickly jumped after the Mabu pilot to catch him. Unfortunately, Flynn proved to be too heavy for Chopper, and they both landed in the snowy area of the Boney Islands. They eventually ended up crashing into the Skylands Museum, where they activated a holographic message from Eon explaining to them about the history of the Skylanders and how they were first banished to Earth.

When Flynn received a bonk on the head, he recovered from his dazed state and frantically explained to Chopper that Kaos was impersonating Weeruptor aboard the Dread-Yacht and was planning on ruining the Skylanders Academy. Flynn and Chopper uncovered a nearby Autogyro and used it to fly out of the warehouse and make their way to the Academy. On their way to the Skylanders Academy, the pair came under attack by a horde of Troll  Bombers. They were eventually rescued by the combined efforts of Cali, Tessa, the real Weeruptor, and Wildfire. As the group arrived at the Skylanders Academy, Kaos was already being driven out of the school by Food Fight. 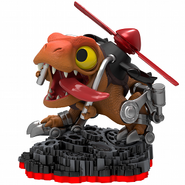 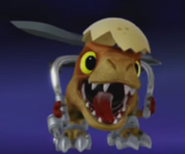 Retrieved from "https://skylanders.fandom.com/wiki/Chopper?oldid=107389"
Community content is available under CC-BY-SA unless otherwise noted.