Chompy Pastepetals are yellow mutant Chompies that have the ability to split into two halves. After that, the smaller halves with one eye stalk become as fast as Chompy Blitzblooms. 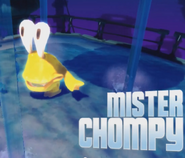 A giant Chompy Pastpetal, Mister Chompy.
Add a photo to this gallery

Retrieved from "https://skylanders.fandom.com/wiki/Chompy_Pastepetals?oldid=94810"
Community content is available under CC-BY-SA unless otherwise noted.