“The champ of chomp!”
—Villain Vault

The Chompy Mage, also known as Vengar in Skylanders: Battlegrounds, is an antagonist who first appeared in Skylanders: Giants. He is a wizard who has the ability to summon Chompies and transform into a giant Chompy. He dislikes anyone who isn't a Chompy, and always has a Chompy puppet on his left hand which he occassionally speaks for. His brother is the Sheep Mage.[1]

Before the events of Skylanders: Trap Team, the Chompy Mage became the latest member of the Doom Raiders. He later traded a life of crime to be part of the Skylander Senseis in Skylanders: Imaginators, training Imaginators of the Bazooker Battle Class.

The Chompy Mage is obsessed with Chompies, so much that he dresses like one and doesn't like anyone who isn't a Chompy. Aside from that, he also appears to have little to no respect for others but his own allies, constantly annoying Flynn until he warmed up to him during the credits of Giants. However, since becoming a Doom Raider, the Chompy Mage shows great respect towards his fellow villains, not intending to turn them into Chompies, knowing that doing so would anger them greatly. He's also convinced he is a natural singer, though other characters believe otherwise.

His Chompy puppet appears to be a split personality or have a mind of its own occasionally, rather childish and carefree; it is seen mocking or looking away from other people during Trap Team cutscenes while the Mage appears to be paying attention to them, replying to him, and in SuperChargers staring down into another Chompy in their vehicle before the Chompy Mage shooed it away. In Battlecast, it also frequently replies to him and talks to the opponents.

After his rehabilitation in Skylanders: Imaginators, the Chompy Mage still holds on to his love for Chompies, but now believes that they should be used for good instead of evil.

Believe it or not, the Chompy Mage actually hatched from inside a Chompy Pod. At least that is how his Chompy hand puppet tells the story. Having been raised by Chompies, it is no surprise that the old magician is a little strange. He simply grew up embracing the Chompy way – believing that Skylands would be a better place if everyone was a Chompy – an illegal enchantment which he has actually tried to perform on several occasions.

The Chompy Mage was on his way to the annual Chompy Convention (ChompyCon), but got lost. He didn't want to ask for directions, so he pretended like he moved to Wilikin Village on purpose. The Chompy Mage then figured he would stay there for a while, practicing his magic, and then set out for the ChompyCon next year.[2] However, his antics proved to be a nuisance to the Wilikins, eluding the residents by switching between the real world and the Wilikin world. Eventually, the Skylander confronted the Chompy Mage and defeated him at the edge of Wilikin Village. He later appeared in the credits, conversing with Flynn.

Eventually, the Chompy Mage's forbidden magic to turn others into Chompies led him to be locked up inside Cloudcracker Prison, where he met the other Doom Raiders. Of course, they all thought he was completely crazy, but the Chompy Mage can see through the eyes of any Chompy in Skylands — and having a few billion little spies can come in handy when trying to enact revenge on the Skylanders. Plus, he could secure the Chompy vote for any sort of political elections that followed.

The Chompy Mage, along with the other remaining members of the Doom Raiders, were freed from Cloudcracker Prison by Kaos who attempted to assume leadership over the villainous group. However, the Doom Raiders were more willing to follow orders of their original leader, the Golden Queen. The Chompy Mage was sent by the Golden Queen to locate all the Traptanium needed to create their Ultimate Weapon. He confronted the Skylanders in his hot air balloon in an effort to stop them from reaching the Chompy Mountain entrance. Fortunately for them, there was a cannon nearby, so the Skylanders could make comeback shots from the Chompy Mage's own cannons.

After freeing Mabu Defense Force member Snuckles, the Skylanders faced the Chompy Mage atop the Chompy Head Spire, and, despite his many Chompies and his imposing Chompy forms, he was defeated once again. However, he manged to inform the Doom Raiders of the location of all the Traptanium in Skylands before his capture.

After the Skylanders saved the Phoenix Chicken from Chef Pepper Jack, they took him and Broccoli Guy on board the Chef Zeppelin for their Villain Quests. Chompy Mage's quest was called "Free the Chompies!", provided by a Mabu chef named Cookie. He explained to the heroes that he was responsible for wrangling all the ship's Chompies, and that he didn't attend the Royal Cooking Academy to get bit ever so often, and pleaded the mage's assistance so he could finally work in the kitchen. After freeing the critters, Chompy Mage was awarded with Cookie's thanks and a new outfit.

The Chompy Mage reappeared as a raceable villain riding his signature vehicle, the Chompy Buster. After defeating him in Boss Pursuit, the player will be able to race as the Chompy Mage in Race Mode.

After breaking out and joining the other Doom Raiders, Chompy Mage was once again captured by the Skylanders. Eon gave him and other villains a choice - either go back to jail or become Skylander Senseis, teaching a new generation of Imaginators their formidable battle skills as well as how to stay clear of a life of crime. They accepted the deal, but first had to prove themselves by re-arranging all the books in the Academy's library, a task which took almost two years, testing every ounce of will they had. This also gave Chompy Mage time to take up the bazooka, which he was naturally so good at that he now trains Imaginators of the Bazooker Class as a Sensei master.

Being a wizard, the Chompy Mage has the ability to summon magic that can either be harmful or heal the Skylanders, switching the worlds will reverse their properties. He also has the ability to transform into a giant Chompy, and summon Chompies with a wave of his staff. The Chompy Mage can use his staff's magic to turn anyone into a Chompy. He can also summon a forcefield to protect himself, or teleport when the time calls for it.

As a giant Chompy, the Chompy Mage can release eggs that would hatch into regular Chompies or Enfuego Chompies, depending on which world they are in. He can also blow gusts of wind, and inhale to draw the Skylander towards it to bite them. In Trap Team, the Chompy Mage reveals the ability to change into his Super Magma form while in his Chompy stage. In Skylanders: Battlecast, that is extended when he also shows the ability to change his element to Water and become a Jumbo Frigid Chompy, or become a Jumbo Enfuego Chompy with the Fire element.

Upgrade the Chompies!
Upgrade Talk to the Hand!

Chompy Mage's villain theme is Mad Chase, from APM Music. His boss themes across the games are remixes of various existing themes, Icicle Isle in Giants and Volcanic Vault(known as Legendary Ancient Sewers in the soundtrack) in Trap Team. 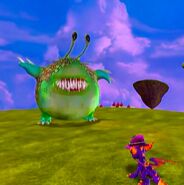 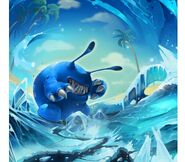 Chompy Mage taking on some Trolls 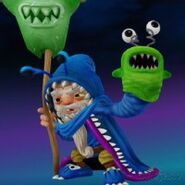 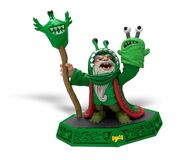 Retrieved from "https://skylanders.fandom.com/wiki/Chompy_Mage?oldid=116442"
Community content is available under CC-BY-SA unless otherwise noted.