Chompies are one of the most common monsters in Skylanders series that are not very bright. They are green creatures that bark and yelp like dogs. They sometimes spawn from Chompy Pods or Root Runners, and by destroying them, the Chompies will stop appearing.

The rarest Chompy is the Purple Chompy that is only found one of the Heroic Challenges. Surprisingly, it is noted by Cali that they are not as bad as their green cousins, but despite that, Purple Chompies still attack the Skylanders.

In Skylanders: Trap Team, a Chompy and a Bone Chompy villain can be trapped.

According to the 10th Anniversary Livestream, Chompies were one of the earliest enemies, and were used in the initial prototype of Spyro's Kingdom on an early version of Stonetown. Unlike in the final game, they would always attempt to latch onto the Skylander rather than as a short range attack.[1]

Italicized text refers to values only present in Heroic Challenges.

Italicized text refers to values only present in Heroic Challenges.

Values may vary depending on location, difficulty, and/or other factors.

Chompies can lunge forward with their mouths completely open to bite, growling as a warning to the player. In Skylanders: Battlecast, regular green Chompies can imbue their fangs with poison to reduce their target's max health, and elect a Chosen Chompion to increase the attack of one in behalf of other Chompies on the team.

All Chompy enemies in Skylanders: Battlecast have base 40 power and 150 HP. This generally makes them easy to take down; however, the more active Chompies there are on a team, the more powerful their character spells become.

The Chompies as seen in Skylanders: Swap Force. 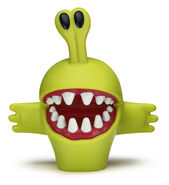 Chompies as seen in Skylanders: Imaginators 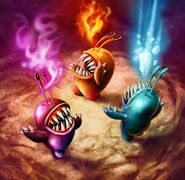 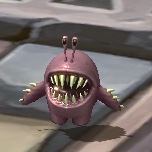 An Air elemental Chompy in Ring of Heroes